At the ceremony (Photo: VNA)

Meanwhile, four round-trip flights will be available each week on the Phu Quoc-Mumbai route and three on the Phu Quoc-New Delhi route from September 8 and 9, respectively.

Prior to the pandemic, Vietjet had operated two direct routes linking Vietnam’s capital city of Hanoi and the financial hub of Ho Chi Minh City with India's capital city of New Delhi in addition to charter flights from Vietnam to Bodh Gaya, the Indian Buddhist pilgrimage site. The two existing services between Ho Chi Minh City/Hanoi and New Delhi will soon resume, on April 29 and April 30, respectively, with a frequency of three weekly return flights on each route. 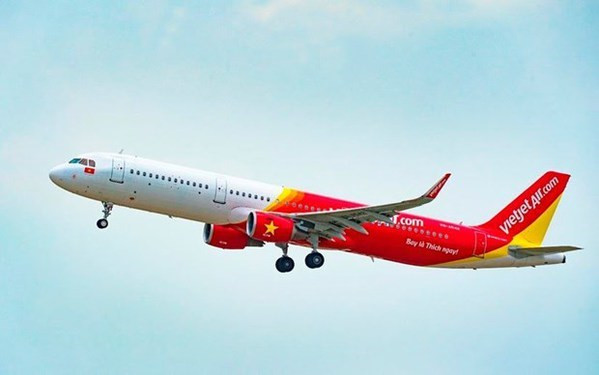 "We are thrilled to continue connecting Vietnam with India, the country of 1.4 billion population via six direct routes, and reenergise our operations right in the post pandemic environment,” said Vietjet Managing Director Dinh Viet Phuong.

“With flights of just over five hours per leg, and a convenient flight schedule on offer throughout the week, Vietjet's renewed and increased connectivity between Vietnam and India will create many more trade and tourism opportunities between the two countries, helping to boost the economies of both. The expansion of Vietjet's flight network into India also reaffirms the airline's ongoing commitment to continuously help travellers save on cost and time. Passengers can enjoy flying on our new and modern aircraft and taking transit flights to famous destinations in Southeast Asian countries, such as Thailand, Singapore, Malaysia, and many other countries, thanks to Vietjet’s extensive flight network in the Asia Pacific region,” he added.

On the occasion, NA Chairman Hue and Speaker Birla also witnessed the exchange of documents for the agreement to form a joint venture between Galaxy Digital Holdings, a member of Sovico Group, and India’s Tech Mahindra Limited. The deal is the continuation of the agreement signed between the two firms during the official visit by NA Chairman Vuong Dinh Hue to India last December, under which they will join hands to build a global software development centre in Vietnam, provide big data, Artificial Intelligence (AI) and Machine learning (ML) services, along with the development of research and innovation centres and IT training centres.