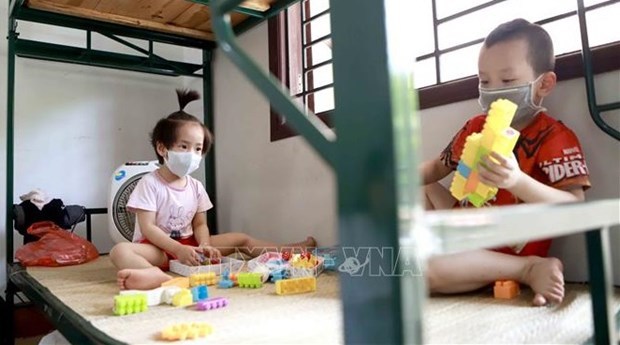 In an interview recently granted to a Vietnam News Agency reporter, NFVA Director Hoang Van Tien said each orphan caused by the pandemic received 5 million VND. The homeless orphans obtained additional 20 million VND each to open a saving book, which could be withdrawn when they reach the age of maturity.

Children who are F0s and F1s of parents under treatment in hospitals will be given 1 million VND each and additional 1 million VND to buy necessities in case they are put under concentrated quarantine.

The NVFA delegations also visited and presented gifts to affected children in localities together with Party and State leaders, he said.

According to him, the NFVA basically achieved the yearly goal of raising 90 billion VND and assisting 110,000 children as of early October 2021.

By late December 2021, it fulfilled child support targets and surpassed fund raising goal by over 150 percent.

However, targets related to the use of medical services such as smile and heart surgeries failed to be met due to social distancing order during the pandemic, making it hard for families to take their children to medical facilities. Therefore, part of funding for the effort will be given to affected children and the remainder will be spent under the request of philanthropists or on surgeries for children in 2022 and subsequent years if possible.

About plans to care for children during the upcoming Lunar New Year festival, Tien said the NFVA followed the Prime Minister’s Decision No.558/QD-TTg on raising social resources for children in specially disadvantaged communes in ethnic minority and mountainous regions by giving warm clothes to children in remote, border and island areas.

After receiving donations from the programme “Spring for Children” on January 9, Tien said the NVFA will send Tet gifts to disadvantaged and COVID-19-hit children shortlisted by localities.

As the pandemic will prolong and spread complicatedly, Tien said the NVFA will maintain effective support activities for children, care for their mental health and help them accustomed to online learning, especially in remote and mountainous areas via learning equipment assistance.

It will also continue pooling resources for the effort, he added.