Among 27 national treasures that have recently been recognised by Prime Minister Nguyen Xuan Phuc, two are in Ba Tam Pagoda located in Duong Xa Commune, Gia Lam District on the outskirts of Ha Noi.

The two new national treasures – a pair of stone kylin statues and a red-lacquered altar trimmed with gold – are expected to help turn the thousand-year-old pagoda into a top tourism destination in the capital. 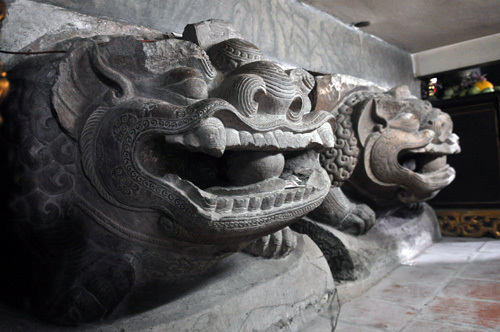 Legend has it that Ba Tam Pagoda was built during the Ly Dynasty (1009-1225) to pay tribute to both the Buddha and Y Lan, also known as Empress Mother Linh Nhan.

According to historical documents, Y Lan, originally a descendant of the Lê family, was born in 1044 in Tho Loi Village, which was later changed to Sieu Loai Village in Thien Duc District. During the Nguyen Dynasty (1802-1945), this area was located within Thuan Thanh District in the northern province of Bac Ninh and by 1961, it was integrated into Ha Noi, becoming present-day Duong Xa Commune.

Y Lan was born into a family of silkworm mulberry growers and was famous for her intelligence, beauty and gentle attitude.

She was the concubine of King Ly Thanh Tong (ruling from 1054–1072) and the mother of King Ly Nhan Tong (reign 1072-1128). The empress took the position of regent twice and was accredited with ruling the country, helping the Ly Dynasty flourish.

A follower of Buddism, the empress ordered the construction of many temples throughout the country. She received much respect from citizens and was regarded as Ba Tam (Lady Tam) or Buddha Guan Yin – the embodiment of tolerance, virtue and goodness.

After she passed away in 1117, she was worshipped at the pagoda in her hometown, which is called Ba Tam Pagoda. Over the years, the building has suffered a lot of severe damage.

In 2018, local officials utilised the district’s budget and villagers’ contributions to conduct a general repair and embellishment of the pagoda, aiming to restore and preserve its traditional values.

The striking feature of the pagoda is its collection of precious artefacts, particularly the two recently recognised national treasures – a pair of stone kylin statues dating back to the 12th century and the red-lacquered altar trimmed with gold dating from the 16th century.

The two artefacts meet three important criteria to be recognised as national treasures, including unique originality, unique forms and special values in terms of culture, history, art, particularly those associated with figures with meritorious services to the people and the nation. In this case, Empress Mother Linh Nhân.

The pair of stone kylin statues serve as a support of a Buddha altar. The kylins are 1.2m high and 1.36m wide, carved from monolithic rock. The word Vuong, meaning King, on the foreheads of the kylins shows they were made following an order from a royal member. The kylins’ manes, ears and mouths are decorated with the symbol of lightning and halo, manifesting the teachings of Buddhism. Featuring all the skills of Vietnamese artisans, the statues are considered masterpieces of 12th-century Vietnamese art.

Likewise, the red-lacquered altar trimmed with gold shows the talents of Vietnamese artisans in the 16th century. The altar, carved with designs of flowers, leaves and sacred animals, has high architectural and sculptural values. It is in a chamber dedicated to worshipping the empress, which is set up like the forbidden palace where she used to live. Next to the empress statuette are statuettes of six female servants, emphasising her noble status.

The pagoda also possesses many other ancient artefacts that date back to the Ly Dynasty including stones, pottery pieces, stone crocodile statues, and a well.

Notably, there are four ancient stone steles that date back to the later Le Dynasty (1428 to 1789) and Nguyen Dynasty (1802-1945), including stele Đức Long inscription in the 6th year (1635) and the King Bao Dai inscription in 1943, recording the years of renovations of the pagoda.

Archaeological excavations conducted by Ha Noi’s Department of Culture, Sports and Tourism and Việt Nam National Museum of History in 2003, 2013 and 2015 confirmed the significant cultural and historical values of Ba Tam Pagoda.

“The excavations confirmed the existence of a large-scale architectural structure of the Ly Dynasty that was constructed by the empress in 1115,” says Nguyen Ngoc Chat, head of the Department of Research and Collecting from Việt Nam National Museum of History.

“The relics and artefacts excavated also confirmed the position and influence of the empress as well as her Buddhist ideology in the spiritual life and traditional consciousness of the Vietnamese,” he asserts.

For years, locals have visited Ba Tam Pagoda to seek relaxation and tranquillity.

On every first day of each lunar month or on full moon days, they come to the pagoda to burn incense and pay tribute to the Buddha and the empress.

The festival of Ba Tam Pagoda is held from the 19th to the 21st day of the second lunar month, attracting not only people from Gia Lam District but from nearby provinces of Bắc Ninh and Hưng Yên and around the country.

“After the official ceremony conducted by the local elders, the villagers and visitors start to give offerings,” says Nguyen Minh Huy, an elder of Duong Xa Commune.

“According to tradition, after the ceremony, the offerings will then be divided into two halves, one of which is given to the village where Empress Y Lan was born and the rest is given to other villages in the commune.

“During the festival, apart from the procession, traditional games and singing performances have always attracted a large number of participants,” he adds.

With the advantage of being located by Highway 5 and preserving a collection of highly valued cultural and historical artefacts, Ba Tam Pagoda has the potential to become a spiritual tourism destination.

According to Phung Hoai Huong, head of the Culture and Information Department of Gia Lam District, the pagoda, together with other local relics like Phu Dong Temple, Phu Thi Pagoda, Keo Pagoda, Chu Xa Communal House and festivals that have been recognised as the national intangible cultural heritage like Giong Temple Festival, has enriched spiritual and cultural tourism in the district.

In addition, the district has many craft villages with great tourism potential as well, such as Bat Trang and Kim Lan pottery villages.

“The collaboration with travel agencies in Ha Noi to develop specific tours and routes has been conducted by Gia Lam District culture and tourism authorities in recent years.

“In the future, we plan to offer new tourism products, including connecting the relics of Ba Tam Pagoda with other relics and craft villages in the district and surrounding areas to improve services for tourists. In addition, the district will focus on promoting the values of new national treasures to preserve and popularise them in Vietnamese spiritual and cultural life,” Huong says.

Those works include the restoration and upgrading of Thien Quang Pagoda and Hạ Temple area, the entrance gate to the festival, the ladder steps up and down the Nghia Linh Mountain and the pedestrian bridge across the Mai An Tiem Lake.

In May 2017, Phu Tho provincial People’s Committee announced the Prime Minister-approved planning project to preserve and promote the value of the Hung Kings temple relic site.

According to the plan, the targeted site will cover areas around Hy Cuong, Chu Hoa and Van Phu communes of Viet Tri City, Tien Kien Commune of Lam Thao District and Phu Ninh Commune of Phu Ninh District with a total area of 845ha including a core zone and a buffer zone.

The 32.2ha core zone will include Thượng (Upper), Trung (Middle) and Hạ (Lower) temples, Gieng Temple, the , Hung Kings Tombs, Thien Quang Pagoda, a house for worshipping ancestors, and a bell tower. These constructions and the surrounding primary forest will be preserved and kept intact under the plan.

The project aims to safeguard natural landscapes and the ecological environment of the historic site while creating a space to commemorate and honour the Hung Kings and national ancestors of the same era.

It also aims to turn the site into an attractive tourist destination to educate visitors on patriotism and solidarity.