The Ministry of Agriculture and Rural Development (MARD) has requested local authorities to explain the deforestation and claim responsibility. 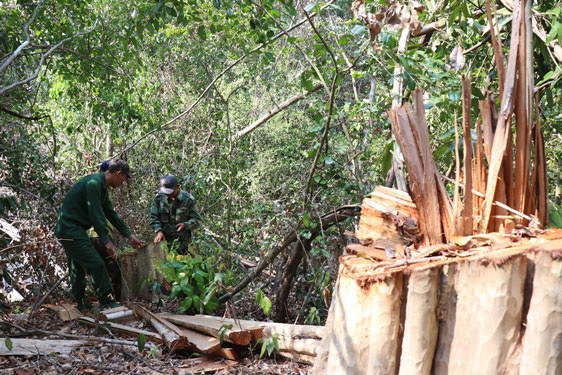 MARD’s Deputy Minister Ha Cong Tuan has requested to check the lost forest area and clarify the responsibilities of organizations and individuals for the forest loss.

It took reporters two days to walk to the fokienia forests in Sub-zone 1219 put under the control of Krong Bong Forestry Ltd Co in Krong Bong district of Dak Lak.

Located in such a disadvantageous position, the fokienia population there has been devastated by illegal loggers for many years. Most recently, 19 fokienia trees, belonging to the protective forest, were found felled by them in April.

Some reporters felt surprised when seeing that illegal loggers cut by 5-10 cm into tree trunks. A forest ranger explained that the loggers examined the quality of the tree to find if the wood was rotten inside. They did this to ‘declare ownership’ with other illegal loggers, sending words that they will come to exploit the trees later.

The fokenia population, comprising trees hundreds of years old, has been the favorite destination for illegal loggers for many years. The sub-zone 1219 alone has witnessed five illegal exploitation cases since 2018, in which hundreds of fokenia trees have been felled.

According to Bui Quoc Tuan, director of Krong Bong Forestry, many local people rely on the forests to earn their living and some of them join the groups of illegal loggers.

The forests in the Nam Kar and Ea So Natural Reserves, and the forests put under the control of Ea Kar Forestry and Chu Pa Forestry Companies have also been devastated continually.

After each case occurred, provincial and districts’ authorities released documents requesting forest owners and relevant agencies to strengthen measures to protect the forests. But more forests have been devastated.

On the trail that linked to Sub-zone 1104 controlled by Duc Hoa Forestry Company, reporters saw many felled trees lying on the ground and the burned trees, which were behind the signboard with the words ‘cam pha rung’ (no deforestation).

The devastated forest area is not far from the checkpoint of the Duc Hoa Forest Company.