With the introduction of modern musical forms, the folk music of ethnic Khmer in the southern region has encountered multiple problems retaining its popular status.

Khmer arts in the south have undergone a long process of development and created a unique identity. Khmer folk music has always been supported by locals since it contains different types of music with melodies associated with the rhythm of daily life, communal activities and festivals 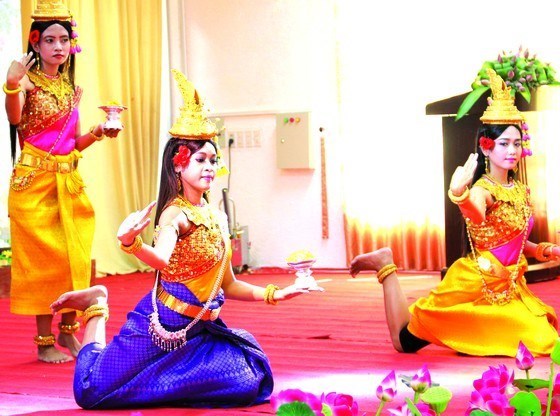 The variety of musical forms include the pentatonic orchestra, Mhory orchestra, wedding orchestra, Sa dam drum performance, A day singing, and lullabies, among other categories.

The music has been 'spiritual food' for the Khmer people for many generations.

The performer conducts singing as a way of storytelling with content sometimes filled with humour to excite the audience.

The songs’ content is usually about fairy tales, myths and folklore that guide locals to be good people.

This special, expressive type of performance in 2013 was listed by the Ministry of Culture, Sports and Tourism as a part of national intangible cultural heritage.

Another significant type of Khmer music is A day, which involves singing in dialogue between men and women.

Though its most common form is a duet performance, A day trio and quartet singing are often performed during the Tet (Lunar New Year) holiday.

“Ethnic Khmer groups in the south have inherited a priceless cultural heritage from their ancestors,” Son Ngoc Hoang, vice principal of the Soc Trang province-based School of Culture and Arts, said.

“Throughout history, Khmer musical instruments carry a positive meaning in the life of the Khmer community, enriching traditional Vietnamese music,” he adds.

Despite its uniqueness, Khmer folk music has become less popular due to the introduction of Western and more modern music genres.

Experts have agreed that some types of ethnic Khmer music are on the edge of losing their identity.

Meritorious Artist Thach Mo Ly said he is concerned that the number of artists performing Khmer music has declined throughout the years.

Fewer young people, especially ethnic Khmer, are interested in learning folk music, she said, adding that the lack of research and promotion of Khmer music contributes to its unpopular status.

Bui Cong Ba from the Department of Culture and Information in Kien Giang province said that he has encountered problems due to limited funding, together with the lack of artists and instruments.

Many Khmer pagodas in Kien Giang do not have a sufficient number of folk musical instruments as well as cultural institutions necessary for the ethnic minority to thrive, he adds.

Pham Thi To Thy from Tra Vinh University said that though the University is the only official institution that has a course on performing Khmer instrumental music, the number of people enrolled remains limited, with only 29 students between 2012 and 2019.

Thy said that authorities should carry out specific measures to raise locals’ awareness about the urgency of preserving the beauty of Khmer music in southern provinces, especially in universities, art schools and other institutions.

The state should also call for investment to restore a number of special Khmer music types such as Cham rieng CHa pay, children's songs and lullabies, she said.

Conservation of ethnic Khmer music should go hand in hand with development of local tourism, she adds.

According to Vice Principal Hoang, preserving and promoting ethnic Khmer music is important in an era of international integration.

Preserving the cultural values of Khmer music requires a policy that helps locals become truly aware of the precious heritage that has been passed down by their ancestors.