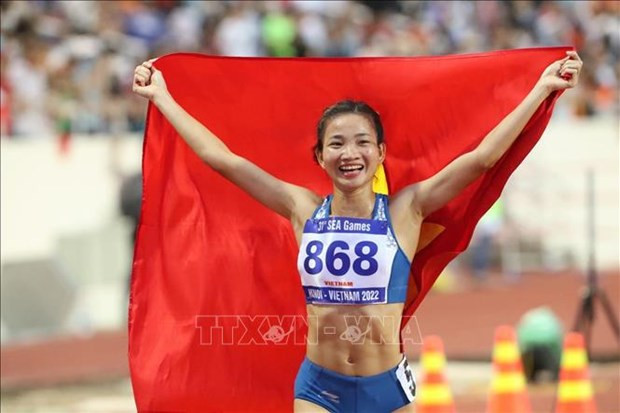 Nguyen Thi Oanh has established her name as one of the stars of SEA Games 31 by scoring a gold hat-trick after two days of competition. (Photo: VNA)

The hosts broke the record of 194 golds set by Indonesia at the 1997 SEA Games in Jakarta. Thailand came second with 92 golds and Indonesia third with 69.

The gold medals have not only rocketed Vietnam to the top spot but also reflected their outstanding progress.

Vietnam’s athletics and swimming teams hauled in important medals at SEA Games 31 with 33 golds, 22 of which in athletics.

Nguyen Thi Oanh has established her name as one of the stars of SEA Games 31 by scoring a gold hat-trick after two days of competition.

Track and field athlete Lo Thi Hoang quenched Vietnam’s long thirst for gold medal in the sport with a javelin throw of 56.37m.

Meanwhile, Vietnam’s first golds in the men’s javelin and the men’s marathon were earned by Nguyen Hoai Van and Hoang Nguyen Thanh.

Host swimmers also made splashes with 11 golds, exceeding their target of 6-8 golds, despite the absence of star Nguyen Thi Anh Vien.

Notably, they got two tickets to the 2022 World Championships, out of the four won by Southeast Asian athletes.

Vietnamese athletes also had impressive performances in other sports, like shooting with seven golds; rhythmic gymnastics, five golds; weightlifting, three golds and six records; fencing, five golds; and canoeing and rowing, each with eight golds; among others. 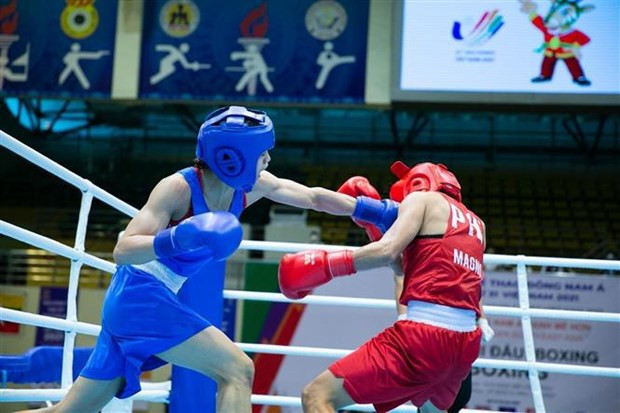 Vietnam wins five golds in kickboxing. (Photo: VNA)
Such figures as Vu Thanh An and Nguyen Tien Nhat in fencing; Dinh Phuong Thanh and Le Thanh Tung in gymnastic; Hoang Thi Duyen in weightlifting, and Nguyen Thi Tam in boxing, to name but a few, have affirmed their position in the regional sport event.

Vietnam’s martial arts teams also made breakthroughs with 10 golds in wushu, nine others in judo and taekwondo each, seven in karate and kurash each, six in pencak silat and vovinam each, five in kickboxing and muay each, and two in jujitsu.

SEA Games 31, themed “For a Stronger South East Asia”, has been held in Hanoi and 11 neighbouring provinces and cities.

Vietnam’s successes in this Games have opened up a new hope for the country in other tournaments. However, the country should invest more to improve the capacity of its athletes to compete in bigger events.
Source: VNA