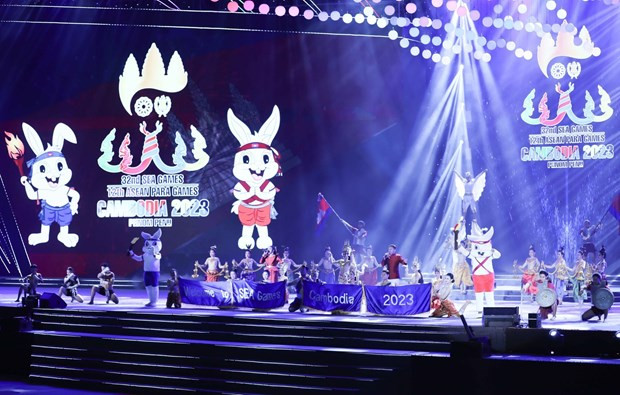 At the closing ceremony of SEA Games 31 (Photo: VNA)

Of the records, 11 were set by Vietnamese athletes, including swimmer Nguyen Huy Hoang in the 400m freestyle and runner Nguyen Thi Oanh in the women’s 3,000m hurdles.

AFP ran an article highlighting new records made at the 31st Southeast Asian Games (SEA Games 31), which concluded in Vietnam on May 23.

Singapore emerged again as SEA swimming kings with 21 golds in the pool. Meanwhile, Malaysia swept all eight golds in the diving, in what was a generally disappointing Games for the country, coming a lowly sixth in the medals table with 39 golds.

Stars of the future were made and bolstered their already global reputation.

Thailand’s 16-year-old Puripol Boonson shattered the 200m Games record and also clinched the 100m gold as he became the region's new sprint king on the track.

Reigning Olympic champions Panipak Wongpattanakit from Thailand defended her taekwondo crown, as did Filipino Hidilyn Diaz in the women's weightlifting.

A national hero in the Philippines, Diaz is already eyeing the Paris 2024 Olympics.

The article cited Prime Minister Pham Minh Chinh as saying at the closing ceremony that "The torch of peace and development in Southeast Asia will continue to shine".
Source: VNA