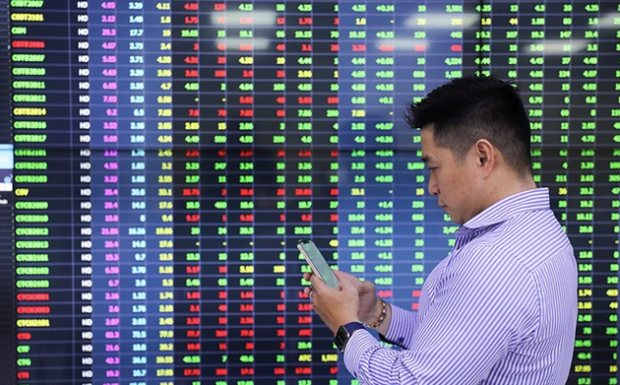 An investor was watching his cellphone in front of a stock trading board. (Photo cafe.vn)

This is the second time the number of new accounts opened in the country has dropped below 200,000 units. The last time was in February, which coincided with the Lunar New Year Holiday.

Trading in the market was also gloomier in July. The average liquidity of the three exchanges decreased by 24% compared to the previous month and dropped by 45.7% over the same period last year to 13.4 trillion VND (574.6 million USD).

The matching value on the Ho Chi Minh Stock Exchange (HoSE) has slipped to the threshold of 10 trillion VND per session, the lowest in about two years.

The decline in market liquidity may be due to the gradual tightening of credit activities, especially for some high-risk sectors such as securities.

Investors also radically reduced the proportion of margin loans to avoid the risk of being caught in a sell-off force in an unfavourable market.

As of June 30, the margin balance in the whole market was estimated to have decreased by about 42 trillion VND compared to the end of the first quarter of about 140 trillion VND.

On the contrary, foreign investors were very active last month with 434 new accounts opened, a sharp increase from the previous month and the highest number since last November.

However, foreign investors suddenly turned into net sellers with a value of 1 trillion VND. Specifically, they net sold more than 400 billion VND on the HoSE.

Previously, foreign investors had been net buyers continuously for three months of the second quarter of 2022, with a total value of more than 10 trillion VND.

Liquidity bottomed out in July, and net selling from foreign investors may have come from cautious sentiment ahead of the decision of the US Federal Reserve in the meeting at the end of July.

The increase in interest rates by 0.75 percentage points was widely expected. And with current economic reports from the US, there is a possibility of loosening the speed of monetary tightening, which has positively supported the market sentiment.

In the first three sessions of August, market liquidity has improved significantly compared to the previous period, with the matching value on HoSE remaining above 15 trillion VND.