VietNamNet Bridge - While fishing in the Gulf of Tonkin, a Nghe An fisherman caught an ocean sunfish weighing 400 kg. Knowing that this is a rare fish, he handed over the fish to the Museum of Nature.

VietNamNet Bridge - While fishing in the Gulf of Tonkin, a Nghe An fisherman caught an ocean sunfish weighing 400 kg. Knowing that this is a rare fish, he handed over the fish to the Museum of Nature. 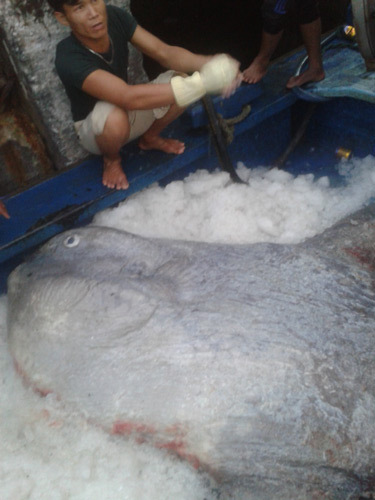 In the evening of July 31, the boat of fisherman Tran Xuan Thanh from Quynh Long commune, Quynh Luu district, Nghe An province net a big fish in the Gulf of Tonkin, about 140 nautical miles from shore.

After pulling the fish to the board, Thanh discovered that it was an ocean sunfish of nearly 2 meters long, 2.3m wide (including both fins), weighing 400 kg.

The fish then died. Knowing that this is a rare fish, the fisherman froze the fish. Immediately after the ship docked, he contacted the Vietnam Museum of Nature to donate the fish.

On August 1, the Vietnam Museum of Nature received the fish.