VietNamNet Bridge - That's the lacquer paintings in the form of a screen, with two paintings on two sides: “Landscape” in the front and “Maidens in the garden” in the back side, by well-known painter Nguyen Gia Tri.

VietNamNet Bridge - That's the lacquer paintings in the form of a screen, with two paintings on two sides: “Landscape” in the front and “Maidens in the garden” in the back side, by well-known painter Nguyen Gia Tri. 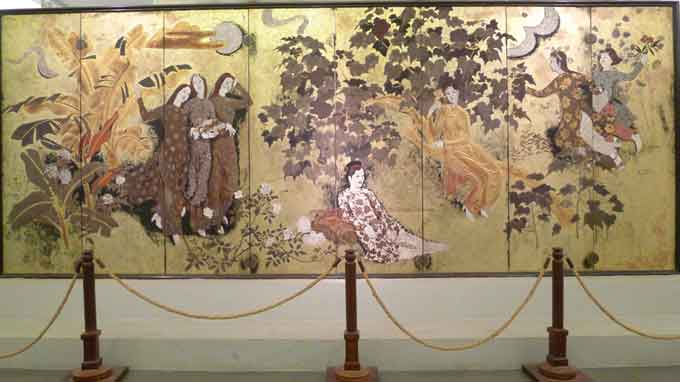 “Maidens in the garden” by Nguyen Gia Tri.

Mr. Do Quoc Vietnam, deputy director of the Vietnam Museum of Fine Arts, said the museum is complete the procedures to ask for the recognition of national treasure for the paintings.

The precious lacquer paintings are on display at the Vietnam Museum of Fine Arts together with many other works in the exhibition of the artist who was awarded the Ho Chi Minh Prize and the State Prize in 2012, from July 29 through August 5 in the Vietnam Fine Arts Museum, No. 66 Nguyen Thai Hoc Street, Hanoi.

However, the lacquer paintings by Nguyen Gia Tri are not hanging in the same place with other works because of the security issues, Viet said. The works are being carefully preserved at the 2nd floor of the modern art zone at the museum.

It is expected that in 2013, the Vietnam Fine Arts Museum will coordinate with a number of private collectors to organize exhibitions of the works of Nguyen Gia Tri and other great painters of Vietnam like To Ngoc Van, Bui Xuan Phai and Tran Van Tran.

To organize the ongoing exhibition, the museum had to borrow many artworks from collectors.

Viet said in 2012, the Museum bought some works by Nguyen Gia Tri from his family and collectors in southern Vietnam. This year, the museum will try to buy works from the central region and the Central Highlands.

"Apart from the great painters, we are also trying to buy paintings by young artists whose works mark the evolution of modern art of Vietnam," Viet said.

Giang Sinh (The Birth of Jesus), one of the most famous works by Tri, has suffered considerable wear and tear and needs to be restored.

The lacquer painting, owned by the Mai Khoi Church in HCM City's District 3, was done in 1941.

The painting was sent to France during the war against the French. With help from Catholic priests in France and at the urging of Father Thien Cam of Mai Khoi Church, the painting returned to Viet Nam in the 1960s.

Since then it has been displayed in a chapel at Mai Khoi Church, on Tu Xuong Street. After some damage was noticed recently, the painting has been stored in a room pending restoration.

The painting was restored once in 1990 by a domestic artist commissioned by Tri, Cam said.

Vi Kien Thanh, director of the Department of Fine Arts, Photography and Exhibitions, said Tri's lacquer paintings could be restored.

"Experts with years of experience at the Viet Nam Fine Arts Museum have restored many silk and lacquer paintings by domestic artists in the past years," said Thanh.

Thanh said the experts were ready to restore Giang Sinh if the church sought their assistance.

Nguyen Gia Tri was born in 1908 in Ha Noi and died in 1993 in HCM City. A graduated of the 1931-36 class at the Indochina College of Fine Arts (now the Viet Nam Academy of Fine Arts), Tri was known for his mastery of lacquer painting.

In 1989, the Ministry of Culture honoured Tri as one of the 10 painters who had made strong contributions to contemporary art in the country.

In 2012, Tri was presented the prestigious Ho Chi Minh Award by the Government in recognition of his cultural and artistic achievements.