VietNamNet Bridge – The authorities of Quang Ninh have suspended the operation of nine tourism boats owned by the Ha Long Pearly Sea Co. for inspection after one of its boat caught on fire on February 3.

VietNamNet Bridge – The authorities of Quang Ninh have suspended the operation of nine tourism boats owned by the Ha Long Pearly Sea Co. for inspection after one of its boat caught on fire on February 3. 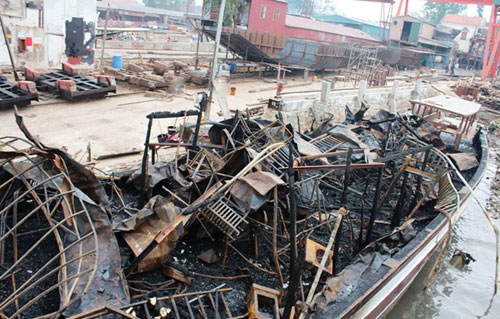 This company’s business conditions will also be checked and it can only resume operations after the inspection.

This firm is running nine wood boats, with eight of them providing overnight services.

The incident happened on February 3 when a fire broke out on a Ha Long Pearly Sea Company's cruise ship Bien Ngoc 08 that lay anchored in Ha Long Bay, one of the most popular tourist destinations in Southeast Asia.

All 16 tourists and nine Vietnamese persons on board were safely evacuated. Images taken by witnesses of the fire showed dark smoke bellowing from the boat that had turned into a torch in the middle of the dark sea.

Reports said that a short circuit had caused the fire.

According to its website, the Ha Long Pearly Sea Company is listed among the top eight cruise services in Ha Long Bay, which is a UNESCO world heritage site that attracts about three million visitors each year.

Safety issues over cruise services in Ha Long Bay have come to public attention in recent years. A cruise boat sank in Ha Long Bay in 2011, killing 12 persons. Ten of the victims were foreign tourists.