Scientists say the average annual rainfall in Ninh Thuan is just 1,000 mm and rains are mostly seen in the last four months of the year (from September to December). Meanwhile, the volume of evaporated water is double that figure, which causes regular droughts. 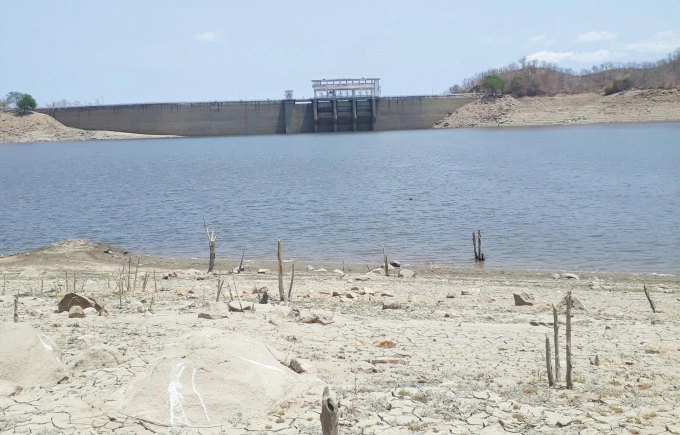 The Ninh Thuan provincial authorities spend big money every year to deal with droughts and water shortage, by building reservoirs and irrigation systems, according to thiennhien.net.

Under the water resources development plan by 2020-2030, the surface water for Ninh Thuan will mostly rely on the Cai Phan Trang water system which covers nearly the whole province, except some coastal areas belonging to the districts of Thuan Bac, Ninh Hai and Ninh Phuoc, where there are rivers flowing straight into the sea.

However, the total volume of surface water used every year is just 800 million cubic meters, while the remaining flows into the sea.

Meanwhile, underground water reserves are very poor, with low mineralization level. In the coastal plain area of Phan Rang, the water containing layer is thin and affected by salinity.

There are 21 reservoirs throughout the province with the total capacity of 194.49 million cubic meters, 7 large dams and 10 pumping stations. There are also tens of small dams and hundreds of field pumping stations in charge of providing water to more than 600,000 people and serving business fields (industries, services and tourism), husbandry and agricultural production.

Ninh Thuan still suffers from the water shortage every year, and the situation has been extremely serious in the years when heavy droughts attack (2015, 2016 and 2020).

Hanoi likely not to see disrupted water supply this summer

Water plants in Hanoi were asked to implement measures to ensure supply for the city during summer when demand for water usually increases, said Deputy Director of the city’s Construction Department Hoang Cao Thang.