Hundreds of people from 10 provinces will participate in various entertainment activities that will be held as part of the ninth Culture, Sports and Tourism Festival of the northeastern region.

Hundreds of people from 10 provinces will participate in various entertainment activities that will be held as part of the ninth Culture, Sports and Tourism Festival of the northeastern region. 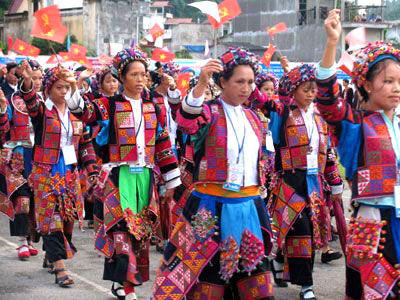 The event will be held in Bac Kan Province from September 10 to 12.

The "Northestern Region: Convergence, Solidarity and Development" festival will be attended by participants from the provinces of Phu Tho, Ha Giang, Tuyen Quang and Cao Bang, as well as Lang Son, Thai Nguyen, Bac Giang and Quang Ninh, besides Vinh Phuc.

Various traditional customs and festivals of the ethnic groups in these provinces will be presented at the venue, while a mass art festival will be organised. A traditional costume show will also be a highlight, along with an exhibition of traditional cuisine, other forms of cultural heritage as well as the area's tourism potential. A trade fair will promote local agricultural products and a workshop on tourism in the region will be held.

Folk games such as tug-of-war, crossbow and mini football will be organised.

"This is an important cultural event that aims to introduce local cultural heritage as well the tourism potential to both domestic and international visitors," Hoang Duc Hau, head of the culture ministry's ethnic culture department, said. "The event will also help preserve and promote the traditional identity of the ethnic groups, while enhancing solidarity among the people in the region," he said.