Over 18,400 traffic accidents occurred across the country over the last ten months, killing nearly 7,200 people and injuring more than 16,700, the National Traffic Safety Committee (NTSC) reported.

Over 18,400 traffic accidents occurred across the country over the last ten months, killing nearly 7,200 people and injuring more than 16,700, the National Traffic Safety Committee (NTSC) reported. 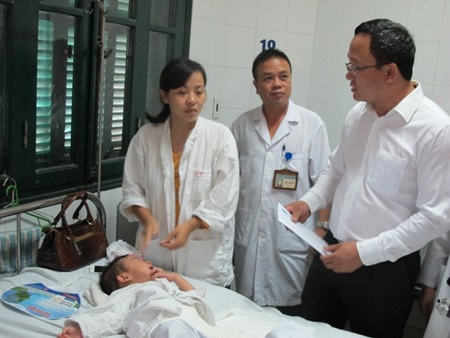 However, compared to the same period last year, the number of traffic accidents, deaths and injuries are down by 11 per cent, 4 per cent and 16 per cent, respectively.

In response to "World Day of Remembrance for Road Traffic victims 2015," the NTSC presented gifts to victims of traffic accidents at Viet Duc Hospital yesterday in Ha Noi.

Deputy Chairman of the NTSC Khuat Viet Hung noted that due to the co-operation of all government agencies, the number of traffic accidents, deaths and injuries have decreased.

Therefore, each person must obey traffic laws to protect themselves and their loved ones, as well as limit the harm done to their communities.

Deputy Director of the Viet Duc Hospital Nguyen Thi Bich Huong said when the hospital receives victims, it is the final step following a traffic accident, adding that the hospital's mission is curing and restoring the lives of accident victims.

The hospital is also committed to providing the finest care to victims and coordinating with the NTSC to raise the public's awareness about traffic safety, so the public will strictly observe road-traffic laws.