Vietsovpetro, a Vietnam-Russia joint venture, has exploited 237.7 million tons of crude oil since 1981, and collected and transmitted 35.7 billion cubic meters of associated gas ashore. The revenue from oil sales has reached $82.4 billion. The Vietnamese side has seen profit of $52.8 billion, while the Russians had $11.5 billion. 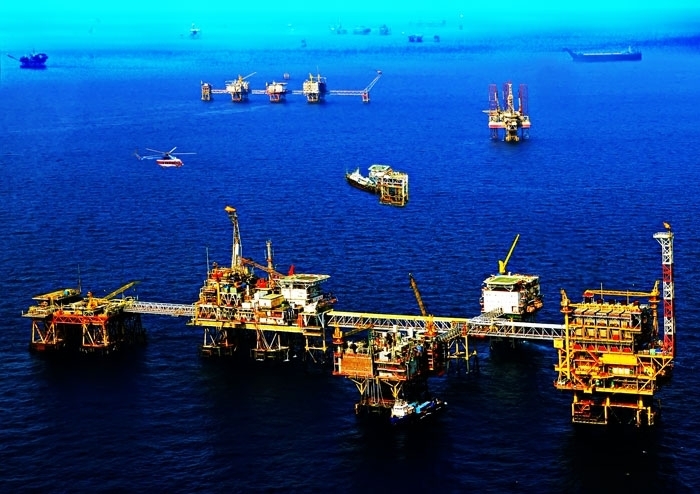 However, the joint venture is facing a depletion of oil field reserves. It now can exploit over 3 million tons of oil each year, which is foreseeable.

The national oil and gas group PetroVietnam has many times warned of the decrease in oil fields’ reserves in recent years. Meanwhile, it is very difficult to find and explore new fields.

The exploitation at some main oil and gas fields has entered the period of output decrease with latent risks in exploitation conditions.

The average export price in the first 10 months of the year was $43.9 per barrel, much lower than planned ($60 per barrel).

Undiscovered oil and gas reserves are believed to be mostly located in deep offshore waters. However, the exploitation will need deep water drilling technology and heavy investments. There are also high risks.

“We are trying to expand the exploitation to other blocks, but the output is insignificant. The White Tiger is entering a period of decline,” Tin said.

The joint venture has been developing other oil fields, but most are near Block 09.1 which other exploiters refuse because of high costs. Only Vietsovpetro can do this as it takes full advantage of the infrastructure nearby to maintain the operation.

According to Tin, in the short term, Vietsovpetro tries to obtain z stable output of 3 million tons per annum to maintain jobs and operation scale.

Believing that the golden days of oil prices will never come back, a representative of Vietsovpetro said the company is seeking permission to develop offshore wind power.

It is still unclear if Vietsovpetro would be an investor or just a contractor. But Tin affirmed that this is the long-term development plan.

Vietsovpetro has experience in executing offshore projects. However, in order to turn this into reality, it will need permission from the two countries and more specialized machines and equipment.

“We cannot do this right away,” Tin said.

Vietsovpetro and exploiters are suffering from the reserve decreases and difficulties in finding new oil fields, but oil and gas technical service providers also are coping with difficulties.

According to Nguyen Huu Hai, deputy CEO of PetroVietnam Technical Services Corporation (PTSC), PTSC is not only implementing projects in Vietnam, but also projects overseas.

Of the projects PTSC is implementing, Gallaf (Al Shaheen) in Qatar has a big workload, valued at over $320 million.

Once the proposal of the Ministry of Industry and Trade (MoIT) is approved, the petrol and oil trading scene may see more foreign players.

Vietnam has become an importer of coal, oil and gas, but experts have warned against a high reliance on imports.