But community tourism in the village, which has won a place on the national tourism map as an attractive destination, struggled to find success without older villagers also working as tour guides. 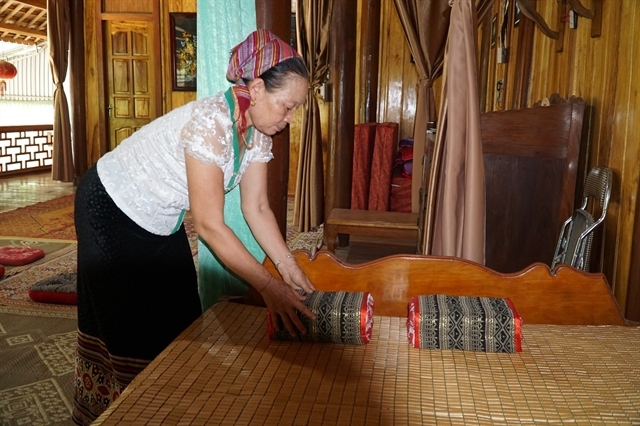 The participation of these old villagers, with their extensive experience in and knowledge of local customs and culture, has helped preserve local cultural and traditional values and at the same time boosted the tourism sector in the province.

The idea of involving older villagers in tourism activities was first raised in 2014, when the Thai Cultural Conservation Club was established by a group of local Thai ethnic minority people.

From an initial eight members, who shared the same pastime of singing Thai folk songs, the club has now grown to 38, including some who have been awarded the title "Excellent Master Singer", like Sam Thi Vinh aged 71.

The club is not only active in folk singing and dancing but also in tourism promotion.

After noting the need for local involvement, provincial tourism authorities encouraged some of the older members of the club, who are knowledgeable about the village’s traditions and culture, to be part of a project developing community tourism in the province by working as tour guides.

Formerly a teacher and among the first of the elders to become a tour guide, Xanh said she was excited to be selected by provincial authorities to be part of the project on developing community tourism in Hoa Tien Village.

“I accepted it as my new mission in life, because I saw that people had trust in me,” she said. “But I also thought it would be fun and I could add whatever I could from my own experience.”

She started out part-time and after several years of mounting passion, enthusiasm, and responsibility now loves the job.

“Through my daily contact with visitors and other people, I grew into the job,” Xanh said.

“I can talk with people from all around the country and even from abroad, passing on what I know about my own village. It’s also a chance to promote a love of our culture and traditions.”

As most tourists to Hoa Tien want to capture the unique cultural identity of the Thai, the village tour guides have worked to sharpen their own knowledge, according to Xanh.

“New activities are being created to meet the increasing demand of visitors to understand our village,” Xanh said. “Sometimes we stage an actual Thai folk music performance right where they are staying.”

“Visitors can not only listen to and even practise singing our folk songs and dances, but can also take part in weaving brocade and then enjoy a traditional meal.”

Lo Thi Nga, another tour guide from Hoa Tien Village, said she and her daughter are pleased to be part of community tours to the village.

The two are now managing their family’s traditional stilt house, which has been converted to provide homestay services.

Guests will quickly see the ingenuity the two women possess in connecting visitors with village life. Also a member of the club, Nga is among the elderly villagers with the traditional occupation of brocade weaving, which her guests are excited to experience during their time in the village.

As for being a tour guide, Nga is happy to take part in developing tourism in the village.

“Many tourists have chosen to stay with us since we opened the homestay,” she said. “We not only earn a better income but also get to introduce our Thai culture and traditional values to more and more people.”

Members of the club, from young to old, are regarded as "messengers" of Thai culture, and a variety of art performances are arranged whenever a group of visitors is expected.

The way the cultural club in Hoa Tien Village operates is being adopted elsewhere in the province and has already reached the provincial level, with members coming from other villages and communes.

The efforts of members have been recognised by provincial authorities as making a contribution to preserving traditional values, presenting the unique culture of the Thai people in Quy Chau District to visitors from all over the world.

Located in the western part of Nghe An Province, Hoa Tien Village and indeed Quy Chau District are endowed with beautiful natural landscapes and are home to the Thai ethnic minority, with unique culture and traditions based on rice cultivation and textile and woodwork crafts.

The Thai women in the village have a deserved reputation for their folk music performances and especially their brocade weaving, which has been a local occupation for many generations.

Travel companies and local residents have come together to provide attractive homestay tours, with the best option being a night or two right in the village.

Thai brocade products were originally made just for family needs and as dowry for brides. The local women are adept at weaving silk and cotton and using herbs, flowers, leaves, and bark as natural dyes, adding unique value to their products.

A variety of activities meeting every taste awaits visitors to Hoa Tien. They will have the chance to enjoy local dishes and wine, try to weave brocade, or take part in bamboo dancing and folk singing.

Foreign visitors are drawn to the village out of curiosity about the cultures of different ethnic groups in general and of the Thai in particular, so these local activities add a particularly worthwhile dimension to any visit.

Many foreign visitors leave impressed by the professionalism and enthusiasm of the old local tour guides.

Homestay is, indeed, the preferred accommodation for most foreign visitors to the western part of Nghe An, which exposes them first-hand to local life and culture.

One tourist, Jagli Lena from Switzerland, said she took part in many of the traditional activities but loved the bamboo dancing the most.

Vietnam has 54 different ethnic groups, each with its own customs, traditions, and handicrafts.

A number of villages have sadly lost their traditional handicrafts due to cultural exchanges and rapid economic development. Hoa Tien Village, however, with its original Thai culture and traditions, remains a popular destination due in no small part to its older tour guides.