The messages, sent frequently at day and night, contain sensitive content and links with unclear origin.

Mobile users in recent months have been disturbed by messages from strange mobile phone numbers. The common characteristic of the messages is that they are sent with OTT apps instead of the traditional SMS mode. And the messages all are ads. 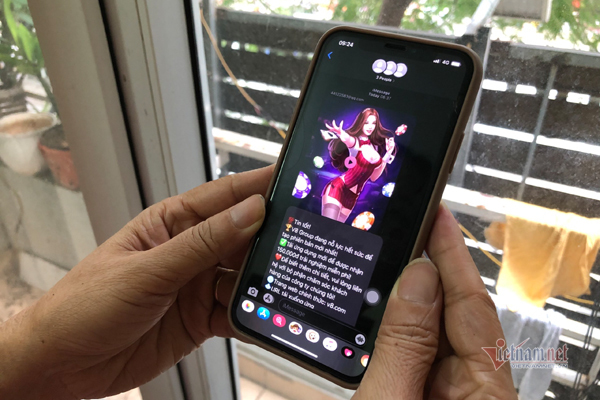 The recipients of the messages are users of OTT messaging apps such as Zalo iMessage and Viber. With the popularity of iMessage, iPhone users are the biggest ‘victims’ of these messages.

Ha Khanh in Hanoi said she has received many messages of this kind in the last two weeks. The messages advertise gambling services, and are associated with images and links to access the services. They are usually sent to groups of 3 people on iPhone’s iMessage.

“Looking at the lists of members in the groups, I found that they are all strange phone numbers, not included in the phone book. As the origin of the messages is unclear, I have to erase them as I am afraid I would accidentally open links that contain malware,” she said.

Many mobile phone users are also facing similar problems. The messages not only advertise online betting, but also invite them to borrow money, take insurance policies, and advertise land and house sales and opening of bank accounts.

All messages sent without the prior consent of recipients are considered spam messages. Together with spam calls and spam emails, it is called ‘telecom spam’.

Experts said the biggest problem in dealing with these kind of messages is that they are sent under the mode of data messages. It is not easy for mobile network operators to filter the spam messages as they can do with SMS messages.

An official of MIC said his department will suggest solutions to the ministry’s leaders on how to deal with the problems.

Under regulations, people who spread spam messages through OTT apps have to pay administrative fines as stipulated in Decree No 15.

The decree says that if someone advertises with messages or provides messaging services via internet but lacks a system to receive and deal with refusals from recipients, they will be fined VND80-100 million.

Spam messages, calls to be blocked in late 2020