VietNamNet Bridge – On the occasion of the country’s 40th reunification anniversary (April 1975 - April 20 2015), a parade and 20-minute firework displays will be held in HCM City.

VietNamNet Bridge – On the occasion of the country’s 40th reunification anniversary (April 1975 - April 20 2015), a parade and 20-minute firework displays will be held in HCM City. 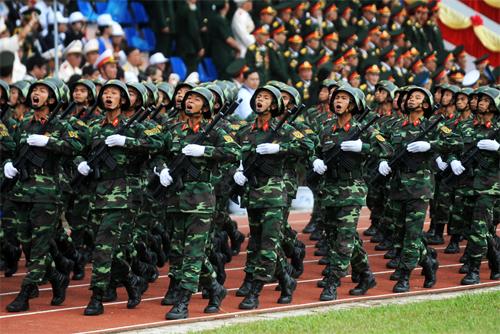 The fireworks will be hosted by the city High Command, in coordination with the Department of Culture, Sports and Tourism and the Saigon Tourist Corporation.

Earlier, the Prime Minister approved a plan to organize activities to celebrate the 40th anniversary of the country’s reunification.

The meeting will be followed by a parade with the participation of the army, the police and the local people.

Also, from 8pm to 10pm on April 30, Ho Chi Minh City will work with the Ministry of Culture, Sports and Tourism to organize art performances at the stage in front of the Thong Nhat Palace.

Key facilities to be inaugurated to mark Reunification Day

A number of key facilities in Ho Chi Minh City will be commenced or completed before April 30 in celebration of the 40 th Southern Vietnam Liberation and National Reunification Day.

Works to be finished by the date include a monument of the late President Ho Chi Minh and a stele house in remembrance of the Alliance of National, Democratic and Peaceful Forces of Vietnam.

Final touches are also being put on a memorial commemorating members of the Saigon Special Task Force that took part in the General Offensive and Uprising of the Spring of 1968.

Meanwhile, the construction of a monument themed “ASEAN: Peace-Cooperation-Development” will begin in the run up to April 30.

Other projects like the upgrade of Luong Dinh Cua Street and the building of an establishment of the city’s Oncology Hospital in District 9 will also begin during this time.