Park Hyatt Saigon will close for a transform

Park Hyatt Saigon will close for a transform

To accommodate the increase in scope of work that prompted the original postponement of this project, whilst preserving guests’ comfort levels and luxury, Park Hyatt Saigon will close for a period of approximately 13 weeks, commencing March 3, 2015.

The projected completion date is currently scheduled for early June of the same year, with the fitting out of the remaining guestrooms continuing until November 2015. The project also focuses on sustainability, with the integration of modern technology to reduce the hotel’s ecological footprint.

Over the past nine years, the 244-room hotel has crafted a reputation for itself as the premium destination in the city by consistently exceeding guests’ expectations, and thus, building a loyal clientele of returning guests.

Whilst still maintaining its French colonial feel, guests will see an increased emphasis on Indochine décor and the addition of more dramatic elements combined with classical luxuries, such as crystal chandeliers, silver leaf white-paneled walls, lush gardens and an eclectic mix of artisan furniture pieces.

Guestrooms and suites will be redesigned combining traditional comforts with the contemporary. Further enhancements include state-of-the-art technology, redefining the overall guest experience and providing the ideal destination for today’s travellers.

National Geographic, has named Phu Quoc island one of the top 15 favoured winter travel destinations for 2014.

It ranks third after Paris (France) and Whitefish, Montana (USA).

National Geographic suggests that visitors should go to Phu Quoc from December to March (dry season), when average daytime temperatures range between 25 and 27 degrees Celsius.

Vietnam Airlines will offer 1,200 additional flights on local and international routes for the lunar New Year.

There will be also 36 additional flights on the routes from both Hanoi and Ho Chi Minh City to international destinations such as Bangkok, Singapore, Hong Kong (China), and Kaohsiung, Taiwan (China).

Additionally, Vietnam Airlines officially opened the first direct flight between Phu Quoc and Singapore on November 2. The new service will be operational with two weekly flights using Airbus A321 aircraft.

Jet Airways Chief Commercial Officer Raj Sivakumar told newsmen after the opening ceremony that this is part of its global expansion plan in Southeast Asian region.

Besides Ho Chi Minh City, the airline will expand their codeshare flights to Hanoi, other ASEAN cities, and Sydney and Melbourne of Australia.

He added that the launch of direct flights will contribute to promoting cooperations between Vietnam and India in various fields, especially in tourism.

Currently, there are a number of Indian travel agents operating in Vietnam, thus the ability to exploit cooperation potential in this field is very large, said Sivakumar. 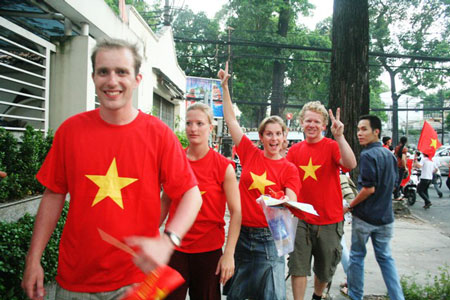 Vietnam welcomed more than 6.6 million foreign arrivals in the first 10 months of 2014, up 8 percent against the same period last year, according to the General Statistics Office (GSO).

Of the total, nearly 4 million foreigners chose Vietnam as the destination for their vacations, while more than 1.1 million others came for business purposes.

However, decreases were seen in several markets like Indonesia (1 percent) and China’s Taiwan (0.1 percent).

The launch of direct air routes between India’s Mumbai and New Delhi and Vietnam’s Ho Chi Minh City by India’s Jet Airways, starting on November 5, will support the pair in tapping their respective enormous tourism potential, said a Vietnamese diplomat.

He stated that the Vietnamese Embassy in India will join in the effort to promote tourism with a plan to organise a workshop on November 24 to connect travel agencies from the two countries and launch a series of campaigns popularising Vietnam’s image in Indian cities in 2015.

Promoting tourism is a focus in the Embassy’s economic diplomatic activities, the Ambassador affirmed, noting the time-honoured friendship and the broadly growing strategic partnership could help both countries explore their huge tourism advantages.

India’s large population with 400-500 million people in the middle class, the country’s increasing number of holiday-makers choosing overseas destinations, and a rise in Vietnamese people making a pilgrimage to Buddhist relic sites in India, should be tapped, he said.

Thanh pledged that Indian media and travel companies will be fully supported when making market and destination surveys in Vietnam.

In addition, cultural exchanges and tourism information provision will be accelerated for the two countries’ holiday-seekers, he said.

The northern mountainous province of Ha Giang has been undertaking efforts to promote the tangible and intangible cultural heritage values of its ethnic minority population in a bid to develop the province’s tourism image.

In addition to infrastructure improvements, local authorities focussed on the preservation of traditional festivals, rituals and craft villages, as well as boosting the role of folk artisans associations.

The province also concentrated on the construction of cultural tourism villages and the modernisation of rural areas to facilitate tourism development, which is a long-term objective for the province.

Deputy Director of the provincial Department of Culture, Sports and Tourism Trieu Thi Tinh said the province is developing ecological and spiritual tourism, whilst preserving the unique values of ethnic minority cultures.

Located in the north of Vietnam at an altitude of 1,000-1,600m above sea level, Ha Giang boasts dramatic landscapes and has great potential for hydropower generation and mineral extraction. The province is rich in biodiversity and home to numerous medicinal plants.

The Dong Van Karst Plateau, recognised by the Global Network of National Geoparks in 2010; Twin Mountain in Quan Ba district; Ma Pi Leng Pass in Meo Vac; and Hoang Su Phi terraced rice fields are only some of the fascinating tourism attractions the province has to offer.