Economic development must be accompanied by social progress and fairness, said an expert. 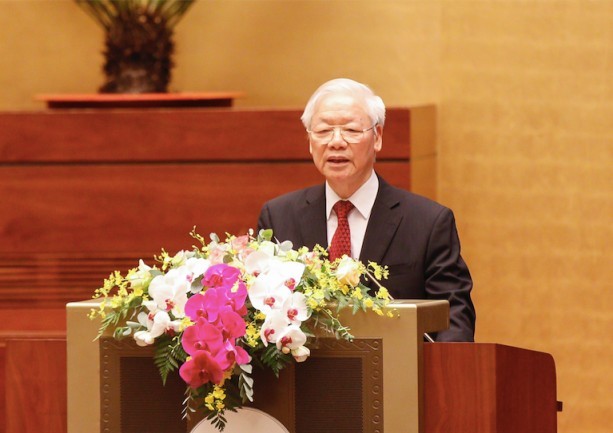 The recent article of Party General Secretary Nguyen Phu Trong on the path to socialism in Vietnam sheds light on the contradictions and shortcomings of capitalism, seen as the root of social conflicts.

Professor Pierre Journoud, a contemporary history lecturer at France’s Paul-Valery Montpellier 3 University told the Vietnam News Agency (VNA) in reference to Trong’s article titled “Some theoretical and practical issues on socialism and the path towards socialism in Vietnam.”

According to Journoud, the article has reflected a balance between ideology and practical values, especially via upholding “Ho Chi Minh Thought” – a comprehensive thought in terms of politics, strategy, economy, morality, and socio-culture.

Another key point in Trong’s writing is the application of Marxism-Leninism in Vietnam, with the Vietnamese leaders effectively tapping positive points of a market economy.

Meanwhile, Denis Rondepierre, a member of the French Communist Party (FCP), said his party shares Trong’s view on issues of the modern capitalist system and its crises.

He stressed the importance of going with a development model that could ensure benefits for all citizens, liberate society and humans.

Economic development must be accompanied by social progress and fairness, Rondepierre said to the VNA.

General Director of the Lao News Agency (KPL) Khampheuy Philapha said as both countries take Marxism-Leninism as a theoretical foundation for their national construction and development towards socialism, Trong’s article proves to be a valuable lesson and of great importance for Laos.

Philapha told the VNA the article showed that national independence associated with socialism is the fundamental and consistent policy of the Vietnamese revolution and also the vital point of late President Ho Chi Minh’s ideology.

The CPV’s policies and goals, including building a political system of the people, by the people, and for the people, are the most appropriate ones, he added.

Right path for Vietnam towards prosperity

KPL’s leader Philapha added the socialist-oriented market economy is a modern market economy integrated into the region and the world while operating in line with the market mechanism under the State’s management via the legal system and under the CPV’s leadership for the sake of “rich people, strong nation, and democratic, equitable, and civilized society”.

Last year, Vietnam became the fourth largest economy in ASEAN with a GDP per capita of US$3,512.

Meanwhile, the rate of poverty sharply declined from 58% in 1993 to below 3% in 2020, as such, the country is not only able to ensure food security but also becomes one of the world’s major exporter of farm produce.

With such achievements, Vietnam has been recognized by the UN as one of the first countries in the world to achieve millennial development goals.

Sharing Rondepierre’s viewpoint, Journoud from the Paul-Valery Montpellier 3 University said the introduction of the socialist-oriented market economy model in Vietnam has contributed to production force liberation and scientific-technological development. He said one of Vietnam’s most important achievements since the “Doi Moi” (Renewal) process was launched is to maintain considerable economic growth and thanks to which the poverty rate has dropped significantly.

He added another achievement is to pursue an open-door policy, international integration, and a foreign policy of diversification and multilaterism.

Journoud emphasized that Vietnam is playing an increasingly important role in ASEAN and the world, while its strong commitments to the United Nations and peacekeeping missions in Africa are enriching the country’s experience and strengthening its global reputation.

Vietnam is on the track to becoming a regional power, he said.

On challenges that Vietnam is facing, Journoud stressed the necessity for Vietnam to take into account long-term development and sustainability in its socio-economic policies.

In this regard, a key task would be to narrow inequality during the economic development process, preserve traditional identity and cultural value during the country’s efforts in global integration.

Journoud also called for Vietnam to continue pushing for the fight against corruption, which had been a priority in recent times.