Travel firms are busy these days as more people have begun booking tours. The number of travelers is expected to increase before, during and after the Tet holiday. 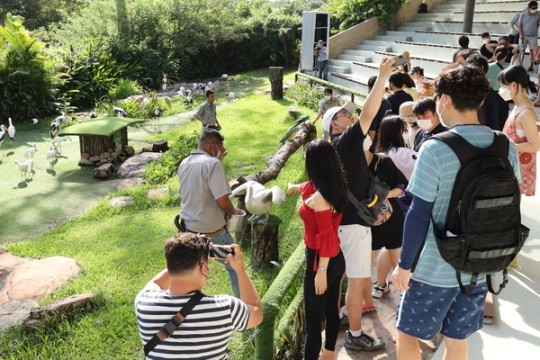 Hoang Nga in Hanoi and her family plan to go to Phu Quoc Island this weekend, several weeks before Tet. Air tickets and hotel rooms have been booked and the prices are “very reasonable”.

Vietnam Airlines’ return ticket is lower than VND2 million, while the hotel room rate is VND1 million per night. She said she needs to find out about additional procedures before going to the airport and arriving in Phu Quoc.

Nga said now is the best time for her family to travel to celebrate Tet.

“We will be very busy after Tet. During Tet, we have to visit relatives, and send New Year’s greeting,” she explained. “It will be too crowded at tourism sites during Tet days, so we’d rather travel before Tet.”

Dao Thu Huyen in Cau Giay district said she has booked a tour for her family with departure next week instead of after Tet.

“All of us have had three vaccine jabs. The pandemic wave has been controlled in the south, so we decided to travel. We plan to swim in the sea to avoid the cold weather in the north,” Huyen said.

Traveling before Tet is a growing trend. Phu Quoc these days is full of tourists. Nguyen Vu Khac Huy, CEO of Vina Phu Quoc Travel, said unlike previous years, when people only began traveling from the second day of Lunar New Year, they now travel before Tet. There are 30 flights at Phu Quoc Airport each day.

According to Huy, Saigonese have flocked to Phu Quoc. There are also travelers from Hanoi. His workers have worked late at night because of the high demand.

His firm plans to serve 800-900 travelers in January and has bookings for tours until the end of the first quarter of the year.

Tran Nguyen from Sun World (Sun Group) said the there are many bookings. The hotel room occupancy rate of the Sun Group system in Phu Quoc is 30-40 percent now, while the figure is expected to rise to 70 percent during Tet.

Nguyen Van Tai, CEO of VietSense Travel, said the Tet travel season has begun. However, it seems that the demand of northern people seems to be lower than central and southern residents. They now go in small groups instead of large groups as seen in previous years.

Nhu Thi Ngan, CEO of Hanoi Tourism, reported a gradual increase in the number of tourists, though it is smaller than the previous years.

According to Huy, many travelers have had three vaccine jabs, so they feel safe when traveling. Some travelers test themselves before departing to avoid risks. However, travelers tend to avoid meetings with strangers and don’t want to go to crowded places.

He predicted that Phu Quoc tourism would see a boom after Tet, receiving large groups of travelers, especially MICE (meetings, incentives, conferences, and exhibitions). Workers of travel firms, including his, will have to work throughout Tet days.

Tai is optimistic about this Tet tourism season. VIetSense Travel can sell tours with different itineraries and demand is very high in the south. The travelers, who reserved tours during pandemic days, have said they would use services on Tet days.

Tai believes that the success in Tet will be a premise for tourism to gear up for the April holiday, summer and Q3 2022.

Ngan can see optimistic signs. “I received a lot of calls from customers, including older people, to organize outings. Some banks have booked spring tours for their workers. This shows that customers are gradually becoming confident, accepting to live together with the pandemic,” she said.

Nguyen Chau A, CEO of Oxalis Adventure, has revealed that the tours of Son Doong cave exploration tours for 2022 have sold out, while 100 travelers have booked tours with departure in 2023. Most of them are foreigners. Son Doong in particular and adventure tourism remain very attractive to tourists.

While optimistic about high demand, travel firms still are anxious about the changes in required procedures.

Though the Government released Resolution 128 on ‘living together with the pandemic’, many localities have set barriers restricting travel. People must have negative test results to be able to enter these localities. If the localities close the doors if Covid cases are found, tours will be canceled and travel firms will suffer.

The outlying district of Can Gio in HCM City is becoming an ideal eco-destination for stressed-out urbanites to visit on two-day, one-night tours as it is considered one of the safest places in the city amid the COVID-19 pandemic.