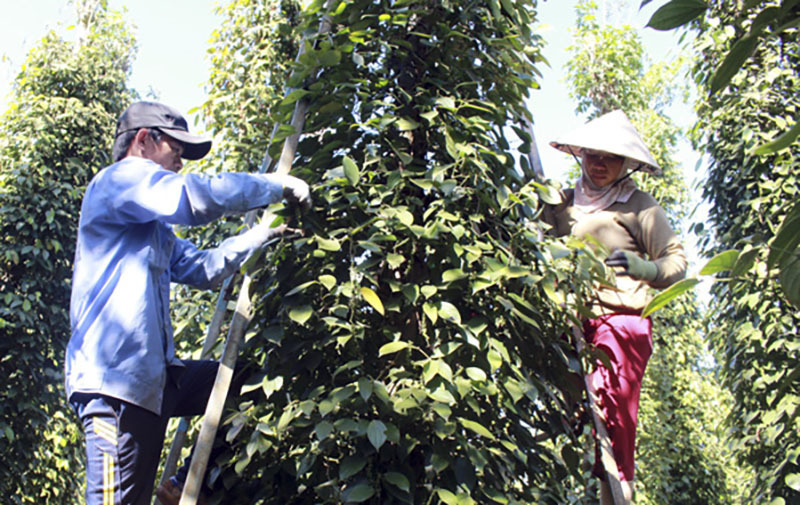 A report from the Ministry of Rural Development (MARD) showed that the average pepper export price in the first 10 months of the year increased by 71.3 percent to $3,434 per ton, the highest level since 2018.

The export value increased by 44.2 percent over the same period last year, despite the 5.7 percent decrease in export volume to 783,000 tons.

The price slightly decreased in early November, but is still high, at VND86,500-89,000 per kilogram in the pepper metropolises of DakLak, DakNong, BaRia-VungTau and DongNai.

MARD predicted that the export volume in the last two months of the year may reach 40,000-45,000 tons. With the price increases in the world market, exports are expected to bring turnover of $1 billion this year.

According to VPA, since the pepper output in Vietnam and other countries has decreased sharply because of climate change and demand increases in the year-end sale season, pepper prices will continue the upward trend. If so, the inventory pepper will sell out.

With the strong rebound, experts believe that Vietnam’s pepper will see its golden days coming back.

Le Hoang Tai, Deputy Director of Vietrade, said Vietnam’s spice and flavor industry is witnessing an impressive transformation, which is turning the country into an important source of spice and flavor supplies.

The demand in the world is increasing rapidly, while some supply sources are decreasing, which means a great opportunity to boost exports.

Hoang Phuoc Binh, Deputy Chair of Vietnam Pepper Association, believes that pepper prices will be better in late 2021 and the following years, predicting that the price would reach VND100,000 per kilogram later this year.

If pepper can go for good prices, many farming households will resume pepper cultivation.

Vietnam is at risk of losing out on major pepper export markets due to increasing logistics costs, according to the Vietnam Pepper Association (VPA).