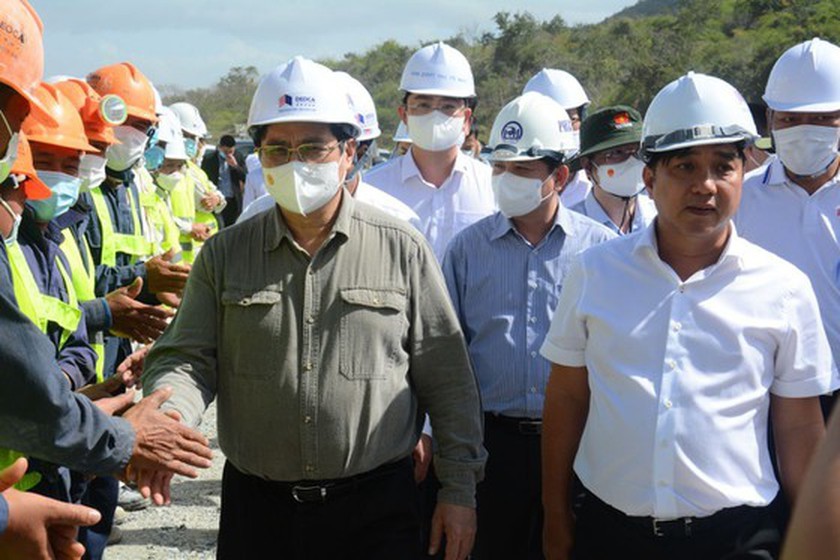 The PM speaks to workers on the construction sites (Photo: SGGP)

On the construction site of the Nui Vung tunnel in the South-Central Province of Ninh Thuan with the length of 2.2km and the width of 14m including three lanes, Prime Minister Pham Minh Chinh highly appreciated investors who have poured money into a nearly 80km-long highway in the format of public-private partnership after inspecting and listening to the investor's quick report on tunnel construction items.

According to the Prime Minister, the public-private partnership accounts for 60 percent of the state capital while other investors have contributed 40 percent. Therefore, if the Law on Investment is applied now, it is clear that this project has not been implemented, thus losing 40 percent of capital from investors.

Amendment of the PPP law is thus necessarily studied so that the State can mobilize maximum capital from private investors in addition to the state capital for a project.

Regarding the public-private partnership, the Government has recently solved the problem of diversifying capital sources comprising of how to find capital sources legally and how to mobilize effectively.

In fact, in this project, investors have mobilized capital in many forms such as securities, corporate bond issuance, credit contracts, and business cooperation contracts. The remaining projects have not diversified their capital sources, so they are facing difficulties.

The construction management should be carried out in accordance with the law, ensuring the progress and quality of the works. This must coordinate with local administrations in site clearance, relocation, and resettlement, ensuring better life for local inhabitants.

When it comes to the contract, it is necessary to be fair; if the project can progress well, the investor and the owner of the investment will be rewarded, and vice versa.

For this, the Prime Minister assigned the Ministry of Planning and Investment to issue a decree on reward and punishment which will specify capital sources, difficulties, and obstacles. The Prime Minister asked investors to strive to complete the project six months before instead of three months as planned by the investor.

According to investor Deo Ca Group, Nui Vung tunnel in Ninh Thuan Province is the fourth largest road tunnel in the country after Hai Van tunnel, Deo Ca tunnel and Cu tunnel. The Cam Lam - Vinh Hao expressway with a total investment of VND8,925 billion with the length of 78.5km, passes through the South-Central provinces of Khanh Hoa, Ninh Thuan and Binh Thuan. The expressway is one of three parts of the project of the North-South expressway project in the format of PPP.

Previously, the Prime Minister visited, encouraged and gave gifts to the staff and workers who were working at the construction site of Doc San tunnel in Cam Thinh Dong commune in Khanh Hoa Province’s Cam Ranh city throughout the Tet holiday (the Lunar New Year).

The Prime Minister highly appreciated the investor who chose the form of PPP for the Nha Trang - Cam Lam expressway project in the context of the country’s slow economic growth because of the coronavirus pandemic in the past time. He also praised contractors, consulting and supervision units, and localities for working throughout the Tet holiday.

The Prime Minister and leaders of ministries immediately resolved four proposals of investors and contractors related to project costs, technical problems, and design.

In the long term, the Prime Minister requested the relevant ministries and sectors to continue to study and propose to amend the current regulations in order to maximize the mobilization of capital from outside, because if applied according to the current law, this project has already failed. Public-private partnership is not possible or the country will miss nearly 40 percent of investors' capital.

The Nha Trang - Cam Lam section is a PPP project according to the National Assembly’s Resolution No. 52/2017 dated November 22, 2014. The project has been implemented from September 4, 2021, and as scheduled, it will be completed in the third quarter of 2023.

According to the Ministry of Transport’s report, the project investor, Nha Trang - Cam Lam Expressway Investment Company, has signed a credit contract of VND2,046.5 billion with banks and contributed VND514 billion out of 511 billion equity capital.