At the talks (Photo: VNA)

Welcoming PM Chinh’s official visit, the first high-level trip after a decade between the two nations, PM Bettel expressed his belief that it will bring bilateral ties to a new development period as the two countries are preparing for the 50th anniversary of bilateral diplomatic ties next year.

The two leaders expressed their delight at the positive development of bilateral ties, especially in investment when Luxembourg was the third biggest European investor in Vietnam with a total investment capital of 2.6 billion USD.

Highlighting a need for the effective implementation of existing cooperation framework and consideration to set up a new cooperation mechanism that matches each country’s development demand, they vowed to establish a strategic partnership framework for green finance to make the best use of the European country’s strength in investment capital, especially green finance, thus helping Vietnam carry out the national green growth strategy and combat climate change, including delivering on commitments at the 26th United Nations Climate Change Conference of Parties.

They suggested the two countries’ agencies and businesses continue fully and effectively implementing the EU-Vietnam Free Trade Agreement (EVFTA), accelerate logistics connectivity and open a system of warehouses in each country to boost trade and serve as a gateway to the EU and ASEAN while stepping up the signing of the Double Taxation Avoidance Agreement.

Bettel, for his part, described EVFTA as an important driving force of bilateral economic and trade ties. He expressed his support for the EU’s ratification of the EVIPA and spoke highly of Vietnam’s efforts to switch to sustainable fishing practices.

Luxembourg corporations and businesses are increasingly interested in Vietnam with political stability and pro-business environment. They are ready to cooperate with and assist Vietnam in the fields of circular economy, banking, securities, climate finance and especially to turn green finance, which is a strength of Luxembourg, into a pillar of cooperation between the two countries, he said.

PM Bettel supported the increase of scholarships to Vietnamese students to pursue study in Luxembourg, establishment of a close cooperation mechanism between the two countries’ education ministries and universities, and linkage of small and medium-sized enterprises, particularly start-ups.

The Vietnamese leader asked the Luxembourg Government to continue to support the Vietnamese community to contribute to its socio-economic development, as well as receive more Vietnamese workers to the country.

On regional and global issues of shared concern, they vowed to continue working closely together at multilateral forums and international organisations such as the ASEAN-EU cooperation framework, the Asia-Europe Meeting (ASEM), the United Nations (UN), especially during the time when the two countries are members of the United Nations Human Rights Council, in order to contribute to peace, stability, cooperation and development in the region and the world.

On the East Sea issue, they reaffirmed the importance of ensuring peace, stability, security, safety and freedom of navigation and overflight in the East Sea, refraining from the use or threat to use force, settling disputes by peaceful means in line with international law, especially the 1982 UN Convention on the Law of the Sea (UNCLOS). 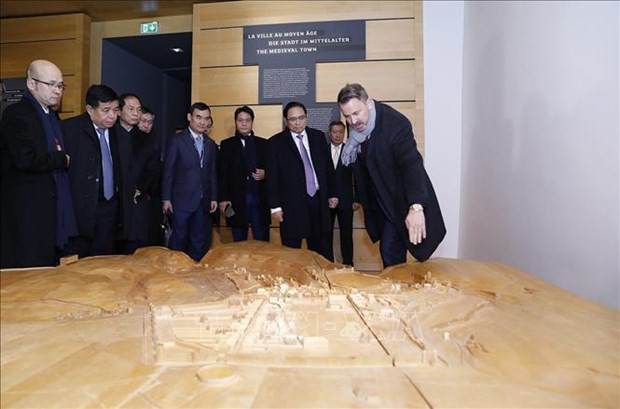 Chinh took the occasion to invite Bettel to visit Vietnam next year. The Luxembourg PM accepted the invitation with pleasure and suggested joint work to arrange the visit via diplomatic channel./. VNA