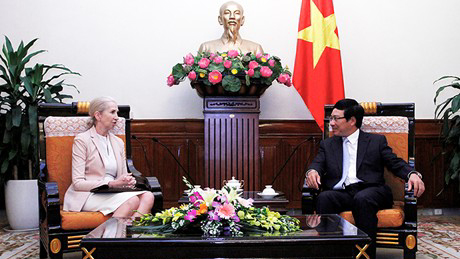 The Vietnam Ministry of Foreign Affairs and other relevant agencies will create the best possible conditions for the Ambassador to fulfill her mission in Vietnam, Minh said.

For her part, the Norwegian diplomat pledged her best efforts to further boost the Vietnam-Norway relations while confirming that Vietnam is one of Norway’s important partners in Asia which serves as a bridge for it to strengthen ties with Southeast Asian nations.

She applauded the effectiveness of development cooperation projects in Vietnam and affirmed Norway’s continued ODA provision for Vietnam in the coming time, focusing on climate change, forest protection and natural disaster control.

Gjerme Eriksen hailed Vietnam’s active participation in regional and international forums such as the United Nations, ASEAN, ASEM and agreed to accelerate the finalization of th Free Trade Agreement (FTA) negotiations between Vietnam and EU members- Norway, Switzerland, Iceland, Liechtenstein which promise to open up new prospects for broader trade cooperation and investment between the two sides in the future.

Vietnam always gives the highest priority to fostering its special ties with Laos and is willing to share socio-economic development experience with the neighbour. Deputy Prime Minister Nguyen Xuan Phuc made the statement while meeting with his Lao counterpart Bunpon Buttavong in Hanoi on October 7.

Both host and guest noted with pleasure that the two countries’ ministries and localities have coordinated closely to realise the conclusion of the 36th meeting of the Inter-Governmental Committee and prepare for the 37th session.

Bunpon Buttavong thanked the Party, State and people of Vietnam for their practical and effective support over the past years, pledging every effort to bolster the Laos-Vietnam relations.

He also expressed hope that the two countries will exchange their experience in socio-economic management and development more frequently, while directing ministries, localities and enterprises to work closer together to implement reached agreements effectively.

Bunpon Buttavong spoke highly of the role that Vietnamese enterprises as well as the Association of Vietnamese Investors in Laos (AVIL) and the Bank for Investment and Development of Vietnam (BIDV) play in the economic development of Laos.

According to Tran Bac Ha, Chairman of BIDV Board of Directors and AVIL Chairman, trade between Vietnam and Laos reached US$939 million in the first nine months of this year, a 45% rise year-on-year.

Of the total, Vietnam’s export was US$298 million  mostly from iron and steel, fuel, transport vehicles and accessories.

Meanwhile, statistics from the Ministry of Planning and Investment, Vietnam has 413 valid projects in Laos with a total investment of about US$ 5 billion, ranking second among countries and territories investing to Laos after China.

Ho Chi Minh City is desirous of expanding cooperation with other countries around the globe, including Vanuatu, Chairman of the municipal People’s Committee Le Hoang Quan said at a reception for Vanuatu Prime Minister Joe Natuman on October 7.

Ho  Chi Minh City will share experience and work with Vanuatu on areas of common interest, especially in agriculture, aqua farming and swallow breeding, Quan told his guest, noting that both nations have enjoyed a flourishing relationship over the past two decades. They have also offered each other support at bilateral and multilateral forums.

Joe Natuman expressed his admiration about the dynamic development of Ho Chi Minh City as well as the important role it plays in the country’s development.

Apart from cooperation under the framework of French speaking countries, the recent signing of a Memorandum of Understanding on technical and development partnership will open up a new prospect for the two countries to step up their relations in agriculture and health care, he stressed.

He said he hopes trade and investment cooperation between HCM City and Vanuatu will thrive in the future.

At the meeting, Deputy PM Ninh told the UK guest that he is happy to see the Vietnam-UK relationship developing well since the two countries elevated their relations to a strategic partnership as a result of expanded cooperation in various realms.

Ninh praised the UK Government’s continued cooperation with Vietnam and its provision of ODA and other preferential loans for the country.

“It is essential for the two sides to increase banking cooperation as Vietnam is now in high demand for investment in infrastructure, the industrial sector, and improvements in people's lives.” Ninh noted

He expressed his hope UK investors will continue to boost cooperation with Vietnam, adding that the Government of Vietnam will facilitate UK investments in the Southeast Asian nation.

Fiona Woolf, in turn, briefed her host on the working session between the London Financial Center and the Vietnam Ministry of Finance on access to capital and financial services to further strengthen trade and investment cooperation between Vietnam and the UK and opportunities for British investors to engage in public-private partnership (PPP) projects in Vietnam.

She also spoke glowing of the efforts by the Vietnamese Government and the banking sector in maintaining economic stability and control inflation while stating that there are many UK businesses keen to invest in the Vietnamese market to expand cooperation areas of mutual concern.

National Assembly deputies said yesterday that the assembly should create better laws and regulations relating to citizen's rights, adding that it should aim to minimise complaints and denunciations.

At the 32nd session of the NA's Standing Committee, deputies agreed that remarkable results had been made in activities relating to the settling of citizen's complaints and denunciations in 2014.

Deputies said that this followed close collaboration by ministries and sectors from central to local levels in settling complaints.

According to a Government report on the issue, the number of citizens visiting the Government's administration offices to complain or denounce people had fallen by 1.8 per cent compared to the previous year. However, the number of group complaints and denunciations increased by 12.1 per cent.

Government Chief Inspector Huynh Phong Tranh said that complaints and denunciations were caused by many shortcomings in the country's laws and regulations.

Tranh said that complaints and denunciations mainly focused on the area of land management and use due to shortcomings in current law and regulations, State direction and management.

The chairman of the NA's Nationalities Council, Ksor Phuoc, and Law Committee chairman Phan Trung Ly said that the increasing number of group complaints and denunciations showed weakness in being able to settle them.

Ly said that citizen complaints and denunciations should be handled at local levels to minimise bigger and prolonged cases.

"More effort should be made to handle prolonged complaints," said Ly.

Deputy Do Van Duong from HCM City suggested that the NA should promulgate a resolution on settling citizens' complaints and denunciations.

The Association of Southeast Asian Nations (ASEAN) and China signed a Memorandum of Understanding (MoU) on Disaster Management Co-operation in Jakarta on October 6.

Under the MoU, China will provide RMB50 million (US$8 million) to support the implementation of the ASEAN Agreement on Disaster Management and Emergency Response (AADMER) Work Programme, the operation of the ASEAN Co-ordinating Centre for Humanitarian Assistance on disaster management (AHA Centre), and the ASEAN Secretariat’s capacity building programmes on disaster management, according to the ASEAN Secretariat’s press release.

ASEAN Secretary-General Le Luong Minh hailed the signing of the MoU as a milestone in the developing partnership with China in the area of disaster management.

Underscoring the importance of working together, Minh said “the signing of the Memorandum of Understanding is the initial step in strengthening the partnership between China and ASEAN. The tasks ahead would require further dialogue and interaction to fully implement the MOU.”

Yan Xiuping, Ambassador of China to ASEAN, stated that “it is the first time that China provides grant to ASEAN through multilateral mechanism.”

Through this grant, China hopes to help countries affected by disasters, she added.