Quy, who is also Permanent Representative of Vietnam to the UN, made the statement following an April 29 meeting to review Vietnam’s rotating month-long UNSC presidency in April.

During the first time serving as UNSC President last year, Vietnam successfully hosted an open debate on partnership between the UN and ASEAN, he said.

Another virtual debate on beefing up cooperation between the UN and regional organisations during the second presidency assumption was a concrete action to fulfil Vietnam’s commitment, he noted, adding that it also provided a chance to promote the image of ASEAN.

Since its inception in 1967, ASEAN has been highly regarded as a grouping very successful in building trust and fostering dialogue, he explained.

Compared to last year’s presidency, this time, Vietnam has emerged as one of few countries able to fulfilling the twin goals of maintaining positive economic growth and keeping the COVID-19 at bay, he continued. This has helped the country propose initiatives with greater confidence and become more proactive in organising consultations, he added.

According to Quy, Vietnam’s successful assumption of the role as President of the UNSC in April is a vivid demonstration of the implementation of the foreign policy set out in the 13th National Party Congress at this important multilateral forum. In addition, during the month, Vietnam performed well an orientation put forth at the congress which is to deepen the country’s bilateral relationship with all countries inside and outside the UNSC, especially those under the council’s discussions in April.

“We have had a very good relationship with those countries, paid attention to their issues, held dialogues with them and left very good impressions on our bilateral relations with them,” he said.

The ambassador went on to say that Vietnam’s greatest achievement when joining the UNSC is to maintain its reputation as well as promote its prestige and image in the hearts of international friends. Therefore, in the remaining eight months of its tenure and beyond, Vietnam will continue efforts to contribute to the general work of the council and the UN General Assembly as a whole./. VNA 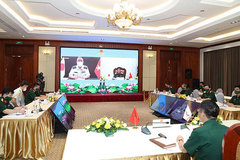