Chairwoman of the Argentina-Vietnam Culture Institute (ICAV) Poldi Sosa Schmidt has attributed Vietnam’s successes to the sound and ingenious leadership of the Communist Party of Vietnam (CPV) and consensus of the whole nation. 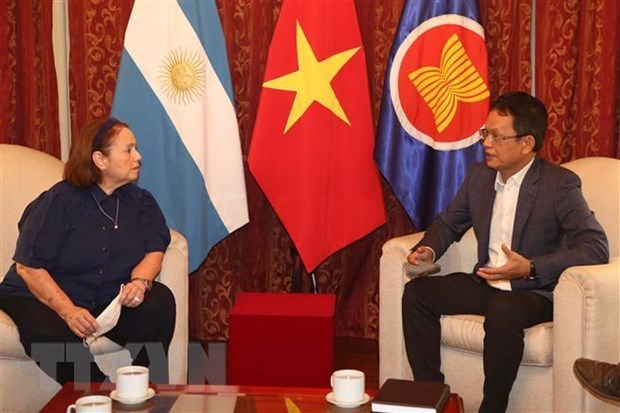 In an interview recently granted to the Vietnam News Agency's reporter in Buenos Aires, Poldi Sosa said throughout its revolutionary history, the CPV has always played a vanguard role and gathered people from walks of life under its fighting flag to make Vietnam an independent and sovereign nation. Following national reunification later, the CPV continued affirming its leadership role and mapped out development orientations, riding Vietnam through challenges to gradually prosper economically. In recent years, Vietnam’s position and voice have been increasingly respected on the international arena.

Poldi Sosa said that she has taken ICAV delegations to Vietnam nearly 20 times since 1998. The country’s changes happen every day and take her from surprise to surprise. The Vietnamese people’s lives have improved significantly over time and the nation has become a destination that many international friends always expect.

She described the upcoming 13th National Congress of the CPV as a significant event to review successes and shortcomings in the past five years, and outline orientations for Vietnam in the next period amid complicated and uncertain developments in the region and the world.

With solidarity and high consensus in the Party, she believed that the 13th National Party Congress will be a success, opening up a new period of development and success for Vietnam.

The ICAV Chairwoman regularly studies Vietnam’s issues via books published in Spanish language and magazines with stories about its history and people. When Vietnam is preparing for the 13th National Party Congress, she frequently checks information about this important political event on the Internet to share with her friends as well as at events organised by the ICAV to popularise Vietnam.

In her young age, Poldi Sosa also joined movements protesting the war in Vietnam. She founded ICAV and served as its Chairwoman so far, creating a bridge to foster friendship and solidarity with the Vietnamese people, as well as stepping up activities to popularise Vietnam’s culture and people to Argentine friends.

The 13th National Party Congress, to open next week, is a milestone in the development of the Party and the nation, according to a high-ranking Party official.

There will be a total of 500 seats in the 15th National Assembly at both central and local levels, according to a new resolution adopted by the NA Standing Committee.

The Political Bureau organised a ceremony on February 6 to announce decisions on the assignment of tasks to two Politburo members.

The UNDP is looking forward to continuing to work with Vietnam’s National Assembly towards closing the gender gap, both qualitatively and quantitatively, UNDP Resident Representative Caitlin Wiesen noted.

Deputy Prime Minister and Foreign Minister Pham Binh Minh had talks over the phone with US Secretary of State Antony Blinken on February 5.

The Ministry of Foreign Affairs (MOFA) and relevant ministries and localities arranged over 300 flights in 2020 to bring nearly 85,000 citizens home from 59 countries and territories, according to Deputy Minister To Anh Dung.

Vietnam supports Agent Orange/dioxin victims in requesting legal responsibilities from US companies producing and selling the toxic chemical used during the war in Vietnam,

The first consultation conference on candidate nomination for the upcoming elections of deputies to the 15th National Assembly for the 2021-2026 tenure was held online in Hanoi on February 2,

Fourteen-day quarantine will continue to be applied on foreign experts, investors, entrepreneurs, management officials and Vietnamese entering Vietnam from other countries,

Vietnam supports the maintenance of peace and stability in the region, security, safety and freedom of navigation and aviation, and the principle of respect for the law on seas and oceans,

Vietnam will host rescue and sniper competitions within the 2021 International Army Games.

The immediate and long-term tasks of the country and the National Assembly (NA) require the legislative body to continue reforms to enhance efficiency, thus contributing more to national development and international integration,

Deputy PM Vu Duc Dam requested relevant agencies and localities to try to limit lockdown to the smallest possible scale during an online meeting of the National Steering Committee on COVID-19 Prevention and Control on February 3.

An agreement on border defence cooperation was signed between the Vietnamese Ministry of National Defence’s Border Guard High Command and the Army Command of the Royal Cambodian Armed Forces in Hanoi on February 3.