According to the Vietnamese Embassy in Thailand, no Vietnamese citizens have been found to have been affected by the April 10 blaze at Central World – Thailand’s biggest shopping complex in Bangkok. 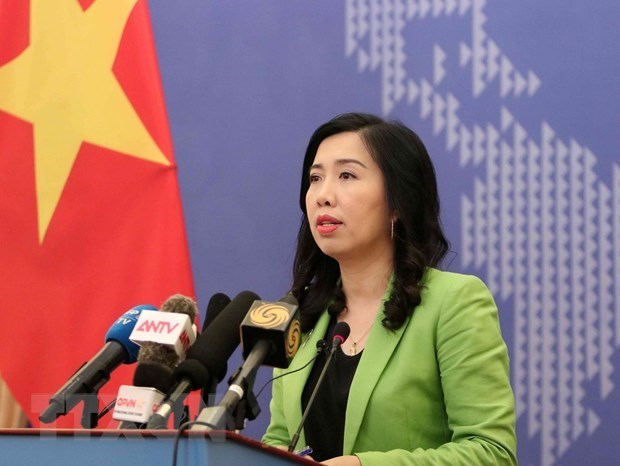 Spokesperson of the foreign ministry Le Thi Thu Hang made the statement in response to reporters’ queries at the ministry’s regular press conference in Hanoi on April 11.

Hang said following direction from the ministry, the embassy will maintain contact with relevant Thai agencies to update information and carry out citizen protection measures if needed.

At the event, reporters also asked about the Amnesty International’s report that was released on April 10 and mentioned the death penalty in Vietnam.

In response, Hang stated that the application of capital punishment belongs to a nation’s sovereignty over criminal justice and is still present in the legal systems of many countries worldwide. Stopping or eliminating capital punishment is not stipulated in basic international treaties on human rights to which Vietnam is a member, she added.

According to the spokesperson, in Vietnam, the sentence and enforcement of capital punishment are applied only to extremely serious crimes in line with the International Covenant on Civil and Political Rights. Judging law violators with violations that can lead up to death penalty is conducted following a strict procedure as regulated by Vietnam’s criminal law. The process ensures the defendant’s rights; respects the presumption of innocence; and ensures the quality of openness, transparency, and fairness.

In its legal reform, Vietnam has many times reduced the number of crimes subject to capital punishment. Most recently, the 2015 Penal Code, which took effect in 2018, cleared eight crimes from receiving capital punishment. It stipulates that people under 18 years old, pregnant women, women whose children are under 36 months old, and people who are 75 and above when they commit the crime are exempt from capital punishment. –VNA

Vietnam is an invaluable member of the ASEAN Community and has actively shepherded a number of important initiatives and led efforts that continue to enrich the ASEAN agenda and experience,

Vietnam and China defined major tasks in the time ahead to beef up their comprehensive strategic cooperative partnership in a sustainable way,

Vietnam and New Zealand have renewed their Strategic Engagement Plan on Education for the period from 2020 to 2023.

The European Union has mobilised a “Team Europe” package of over 800 million EUR (920 million USD) to support ASEAN nation in the fight against COVID-19.

China, Japan and the Republic of Korea (RoK) affirmed their support for ASEAN’s initiatives in promoting co-operation to respond to the COVID-19 pandemic at an online meeting of ASEAN+3 Senior Officials’ Meeting on Monday.

Nguyen Quoc Dung, Deputy Foreign Minister and head of SOM ASEAN of Vietnam, as the Chair of the ASEAN and the ASEAN+3 cooperation framework,

Fans have questioned whether the rapper's last-minute bid for the presidency is genuine.

A Vietnamese delegation, led by Ambassador Le Thi Tuyet Mai - Permanent Representative of Vietnam to the UN, the World Trade Organisation (WTO) and other international organisations in Geneva, Switzerland –

A patriotic intellectual in profile
POLITICSicon  21/07/2020

With extraordinary patriotism and energy, lawyer Nguyen Huu Tho overcame many temptations and the constraints of society at the time to become a leader of the South Vietnam liberation force,