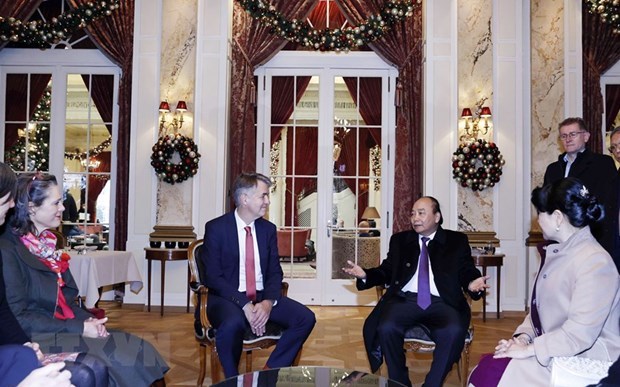 The Vietnamese leader suggested Bern city’s authorities to cooperate with 12 Vietnamese localities, which boast UNESCO-recognised world cultural heritages, in preserving and upholding cultural values, as well as promoting these heritages in Switzerland so that attracting more tourists from Switzerland and other European countries to Vietnam.

For his part, Graffenried stated that Bern is a small city but has a big heart for Vietnam. The city’s authorities will continue to work with their Hanoi counterparts to further strengthen their long-standing cooperation, he added.

Earlier the same day, President Phuc had also meetings with former Swiss President Schneider Ammann, and Honorary Consul of Vietnam in Switzerland Philipp Roesler, who is former Deputy Prime Minister, former Minister of Economy and Science and Technology of Germany.

Ammann, who is also former Minister of Economic Affairs of Switzerland, and Roesler highly valued Vietnam's achievements in socio-economic development and international integration in recent years, which have helped Vietnam confirm its role and position in the region and the world.

They said that there remains great potential for Vietnam to further expand cooperation with Switzerland and Germany in the coming time.

President Phuc thanked Ammann for his sentiments and support for the development of Vietnam-Switzerland ties in his capacity as Swiss President and Minister for Economic Affairs.

The Vietnamese leader expressed his hope that Ammann will further support the enhancement of the bilateral ties, especially in priority economic and trade areas.

President Phuc congratulated Roesler on his appointment as Vietnam’s first Honorary Consul in Switzerland, and lauded his efforts in promoting German and Swiss investments in Vietnam.

Roesler pledged to try his best to enhance relations between Vietnam and European partners and Switzerland in particular.

The Vietnamese President suggested Ammann and Roesler actively support the early conclusion of the talks and signing of a free trade agreement between Vietnam and the European Free Trade Association (EFTA) to create momentum for the Vietnam-Switzerland economic cooperation, especially in the context that the two countries are prioritising the enhancement of economic-trade ties to recover their economies post COVID-19.

Both Ammann and Roesler pledged to contribute to speeding up the negotiations and strengthening the bilateral economic links.

Also on November 27, President Phuc received leaders of DKSH Holding AG, a Switzerland-based company that provides market expansion services, during which he suggested the group continue its investments in Vietnam and boost exports in the time ahead.