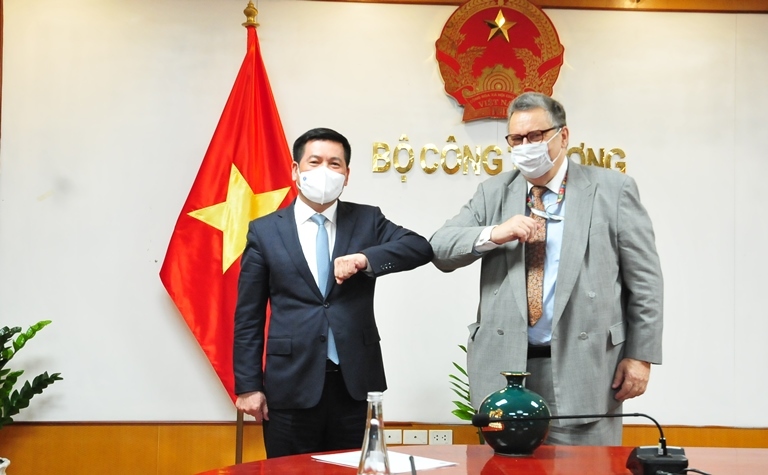 Future cooperation between Vietnam and Finland is very promising, thanks to the favorable legal framework from the EU-Vietnam Free Trade Agreement (EVFTA), as well as strong efforts from both Governments and business communities.

Minister of Industry and Trade Nguyen Hong Dien gave the assessment in a meeting with the outgoing Finnish Ambassador to Vietnam Kari Kahiluoto on August 12 as the latter came to bid farewell.

At the meeting, Dien congratulated Finland for effectively containing the Covid-19 pandemic. As of August 5, the Finnish Government has administered 5.72 million doses of vaccines for two million people, or 36.4% of the population.

“Such progress along with the EVFTA would soon take bilateral trade relations to the normal level,” stated Dien.

According to the minister, Finland is one of Vietnam’s most important markets in the EU as strong growth of trade exchange was sustained despite the pandemic.

For the first six months of this year, bilateral trade turnover rose by 61.2% year-on-year to US$285 million, of which Vietnam’s exports to Finland doubled to $168.5 million, while imports also rose by 20% to $116 million.

In the coming time, Dien expected Vietnam to continue exporting its key products to Finland, including steel, footwear, machinery, and garment products. In return, Vietnam would import machinery, wooden products, chemicals, electronics, along with strengthening cooperation in the energy, health, and education sectors.

At the meeting, Finnish Ambassador Kahiluoto referred to the bilateral Framework Agreement on the use of Public Sector Investment Facility (PIF) signed in early 2021, under which Finland would provide more than $100 million for public investment projects in Vietnam.

Kahiluoto noted while the framework would help Vietnam access competitive financial sources, Finnish companies are set to have the chance to enter the Vietnamese market.

The goal of the project is to finance developing countries to pursue the UN’s sustainable development goals via investment in environmental protection, climate resilience, and renewables, he added.

Vice-Chairman of the Hanoi People’s Committee Le Hong Son on June 22 held an online meeting with Chairman of the Southern Ostrobothnia Region in Finland Kai Pontinen on strengthening trade and investment cooperation.

During the meeting, Son stressed Hanoi welcomes foreign investors to do business in the city, including those from Finland.

“Hanoi looks to continue cooperating with Finnish companies in fields of smart cities, e-government, green energy, education, and training”, stated Son, adding these are fields under the memorandum of understanding (MoU) signed between the city and the Southern Ostrobothnia Region in 2019.