Professor, Dr Nguyen Phu Trong, General Secretary of the Communist Party of Vietnam (CPV) Central Committee, has written an article titled “Some theoretical and practical issues on socialism and the path towards socialism in Vietnam.” 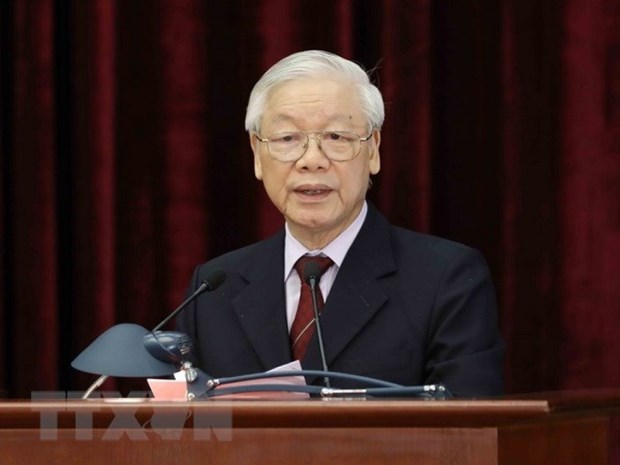 On the occasion of the 131st birthday of President Ho Chi Minh (May 19) and the elections of deputies to the 15th National Assembly and all-level People's Councils 2021-2026 (May 23), Professor, Dr Nguyen Phu Trong, General Secretary of the Communist Party of Vietnam (CPV) Central Committee, has written an article titled “Some theoretical and practical issues on socialism and the path towards socialism in Vietnam.”

Here are some excerpts of the article:

We acknowledge that capitalism has never been as global as it is today and has also reaped great achievements. However, capitalism still has failed to overcome its inherent contradictions.

National independence associated with socialism is the basic and cross-cutting guideline of the Vietnamese revolution and is also the key point in President Ho Chi Minh's ideological legacy.

During the years of Doi Moi (Reform), the CPV has been more and more aware of socialism and the transition period towards socialism.

So far, although there are still some issues that need further study, a general perception has been formed: The socialist society that the Vietnamese people are striving to build is a society of wealthy people, strong country, democracy, justice and civilisation; owned by the people; of a highly developed economy based on modern production forces and appropriate, progressive production relations; and advanced culture imbued with national identity. It is a society where people have a prosperous, free and happy life, and conditions for comprehensive development; ethnic groups are equal and united, and respect and help each other; there is a socialist rule-of-law state of the people, by the people and for the people, led by the Communist Party; and there are friendly and cooperative relations with countries around the world.

To that end, we must: accelerate industrialisation and modernisation in association with the development of the knowledge-based economy; develop a socialist-oriented market economy; build advanced culture imbued with national identity, improve people's living standards, ensure social progress and justice; firmly guarantee national defense and security, and social order and safety; implement the foreign policy of independence, self-reliance, multilateralisation, diversification, peace, friendship, cooperation and development, and proactive and active international integration; build a socialist democracy, carry forward the will and strength of the great national unity bloc, combined with the strength of the era; build a socialist rule-of-law state of the people, by the people and for the people; and build a comprehensively pure, strong Party and political system.

A basic, important feature of the socialist orientation in the market economy in Vietnam is to combine economy with society, economic policies with social policies, and economic growth with social progress and justice.

In the socialist political regime, the relationship between the Party, the State and the people is the relationship between the subjects who share the same goals and interests; all guidelines of the Party, policies, laws and activities of the State are to serve interests of the people. The political model and general operating mechanism are the Party's leadership, the State's governance and the people's ownership. Democracy is the nature of the socialist regime, and is the goal and the driving force of the socialism building. Building a socialist democracy and ensuring that power truly belongs to the people is an important and long-term task of the Vietnamese revolution.

Being deeply aware of the Communist Party’s leadership is a decisive factor in the cause of the Doi Moi and would ensure the country's development in accordance with the socialist orientation. We have paid due attention to Party building and rectification, considering this a key task that is vital to the Party and the socialist regime. The CPV has persistently taken Marxism-Leninism and Ho Chi Minh’s thought as the ideological foundation and the lodestar for revolutionary actions, and have taken democratic centralism as the basic organising principle. The Party’s leadership has been based on platform, strategies, and orientations on policies and major guidelines.

The Doi Moi process, including the development of the socialist-oriented market economy, has really brought about great and positive changes to the country over the past 35 years.

Apart from these achievements, there still remain shortcomings and limitations, along with challenges in national development. The CPV has been aware of these challenges. It is a very tough and arduous struggle, which requires new vision, new mettle and new creativity.

Both theory and practice show that socialism building is creating a qualitatively new type of society, which is totally not easy. Therefore, apart from determining the right guidelines and ensuring the Party’s leadership, it is a must to promote creativity, support and active participation of the people.

On the other hand, while determining political directions and making decisions, it is necessary for the Party to study experience of the world. We must proactively and actively integrate into the world and materialise the foreign policy of independence, self-reliance, peace, cooperation, development, and multilateralisation and diversification of international relations on the basis of respect for each other’s independence, sovereignty, territorial integrity, non-interference in each other's internal affairs, equality and mutual benefit.

It is very important to remain steadfast and firm on the ideological and theoretical foundation of Marxism - Leninism. Such scientific and revolutionary features of Marxism-Leninism and Ho Chi Minh's thought are sustainable values that have been pursued and realised by revolutionaries.

They will further develop in the spheres of revolution and science. We need to selectively absorb and supplement them in the spirit of criticism and creativity.