Deputy Prime Minister, Foreign Minister Pham Binh Minh held talks with US Secretary of State Michael Richard Pompeo at the Headquarters of the Ministry of Foreign Affairs this morning.

The U.S. Secretary of State Mike Pompeo arrived at the Noi Bai International Airport on October 29 to begin his official two-day visit to Vietnam, on the invitation of Vietnamese Deputy Prime Minister and Foreign Minister Pham Binh Minh to celebrate the 25th anniversary of diplomatic relations between Vietnam and the United States.

The visit is also aimed at reaffirming the strength of the comprehensive partnership between the two countries and discussing issues of mutual concern in the East Sea and Mekong region.

The third visit of the U.S. Secretary of State to Vietnam is part of an itinerary that includes several Asian countries such as India, Sri Lanka and Indonesia. Pompeo will meet Minh, Prime Minister Nguyen Xuan Phuc and Minister of Public Security To Lam during his Vietnam visit.

“Over the last quarter century, our countries have established a partnership and friendship founded on shared interests, mutual respect and people-to-people ties. Our everyday interactions are highlighted by the increasing trade and investment ties, strategic cooperation and collaboration over humanitarian and legacy of war issues, including the solemn duty of accounting for our wartime missing combatants,” Pompeo said in a statement.

“In recent years, we have strengthened and expanded our comprehensive partnership, based on a shared vision of a stable and peaceful Indo-Pacific region as well as respect for each other’s independence, sovereignty, territorial integrity and political systems,” he added.

Former U.S. President Bill Clinton announced the normalization of relations between the United States and Vietnam on July 11, 1995. Since then, Vietnam has become one of America’s fastest growing markets, with the two-way trade in goods growing from almost zero to more than US$81 billion annually today.

In areas as diverse as trade, development, education, healthcare, energy and security, the two nations are working together with a shared commitment to peace and security.

Pompeo was sworn in as Secretary of State on April 26, 2018. He previously served as Director of the Central Intelligence Agency from January 2017 to April 2018.

Vietnam always attaches much importance to its comprehensive partnership with the US, Deputy Prime Minister and Foreign Minister Pham Binh Minh said on October 30.

Holding talks with US Secretary of State Mike Pompeo, who is on an official visit to Vietnam from October 29-30, the Vietnamese diplomat expressed his delight over the fruitful development of ties, from politics-diplomacy, economy-trade, and security-defence, to people-to-people exchange.

Minh lauded activities held by both countries to mark the 25th anniversary of diplomatic relations, in the context of the quagmire caused by COVID-19.

He also took the occasion to thank the US Government and the Department of State for giving Vietnam timely support to respond to the outbreak as well as the recent flooding in the central region.

Pompeo, for his part, spoke highly of the two countries’ efforts to enhance their comprehensive partnership based on respect of each other’s independence, sovereignty, and territorial integrity and political institutions.

The US backs a strong, independent, and prosperous Vietnam that plays an increasing role in the region, he affirmed, pledging to maintain stable relations and continue cooperation with the Southeast Asian country to develop bilateral ties in a more practical, reliable, effective, and sustainable manner, contributing to security, peace, cooperation, and development in the region and the world.

The two sides also exchanged views on measures to deepen bilateral ties in the time to come, including giving priority to the early resumption of regular delegation exchanges, and enhancing humanitarian cooperation and efforts to overcome the consequences of war, thus contributing to building trust and facilitating the enhancement of bilateral trade and investment based on mutual benefit.

Minh welcomed the two sides’ effective implementation of the action plan towards a harmonious and sustainable trade balance, while stressing the potential for developing energy cooperation in bilateral economic relations.

He affirmed that Vietnam vows to create a favourable investment and business environment for US firms with long-term operations in the country.

Pompeo highly valued the measures the Vietnamese Government has carried out to reach the harmonious and sustainable trade balance and the recent signing of key deals between businesses from the two countries. He affirmed his support for both sides to continue dialogue and consultation in order to develop trade ties in a stable manner.

Regarding regional issues of common concern, Minh asked the US to continue to support the central role and solidarity of ASEAN and promote the ASEAN-US strategic partnership.

Pompeo appreciated Vietnam’s role as the ASEAN 2020 Chair and a non-permanent member of the UN Security Council for the 2020-2021 tenure. He hoped the two sides will continue strengthening coordination in dealing with common challenges, thus contributing to maintaining peace, stability, security, and development in the region and the world./.

Prime Minister Nguyen Xuan Phuc on October 30 received US Secretary of State Michael Pompeo, who is on an official visit to Vietnam on the occasion of the 25th anniversary of bilateral diplomatic ties.

Phuc highlighted that the Vietnam-US relationship has achieved all-round development over the past 25 years.

He took the occasion to thank President Donald Trump and his administration for substantial and timely assistance to help Vietnam deal with the COVID-19 pandemic and recent floods in the central region.

Pompeo extended his condolences to people in Vietnam’s central region over great losses caused by floods.

Speaking of the outcomes of his just-ended talks with Deputy Prime Minister and Foreign Minister Pham Binh Minh, he reaffirmed that the US attaches importance to its comprehensive partnership with Vietnam on the principle of respecting each other’s independence, sovereignty, territorial integrity, and political systems, and committing to continuing to deepen the ties in the time to come.

The US backs ASEAN’s central role in Southeast Asia, and hopes the US-ASEAN strategic partnership and the US-Mekong partnership will grow more substantially and effectively, the US official said.

PM Phuc highlighted the strategic level of the bilateral energy cooperation, including the increase of liquefied natural gas imports from the US.

He affirmed that Vietnam pledges to create an open and transparent business and investment environment for foreign enterprises, including those from the US.

Both host and guest shared positive assessments on the outcomes of the Indo-Pacific Business Forum held in Hanoi on October 28-29.

Pompeo arrives at the Headquarters of the Vietnamese Ministry of Foreign Affairs. Photo: VGP 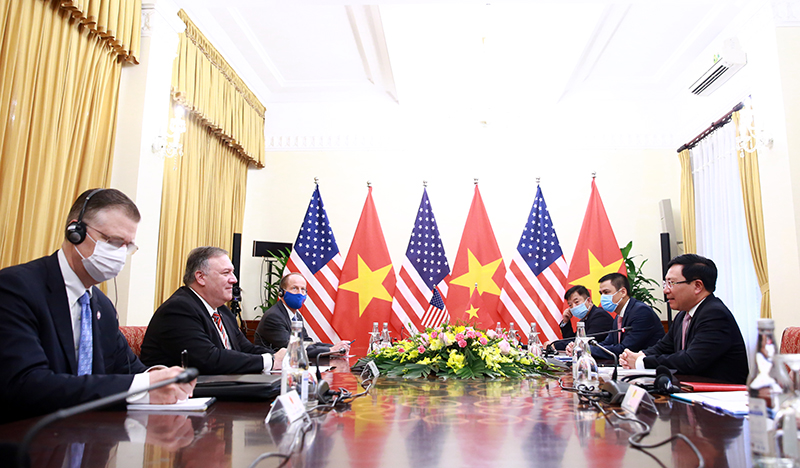 US Secretary of State Mike Pompeo to visit Vietnam

US Secretary of State Mike Pompeo will make an official visit to Vietnam on Thursday and Friday, the Vietnamese Ministry of Foreign Affairs announced Wednesday.