Vice President Dang Thi Ngoc Thinh on October 26 met with leaders of Venezuela, the Democratic People’s Republic of Korea (DPRK) and the Pan-African Parliament on the sidelines of the 18th Non-Aligned Movement (NAM) Summit in Azerbaijan.

At the meeting with Venezuelan President Nicolas Maduro, Thinh said Vietnamsupports the constitutional government of Venezuela and wishes to furtherenhance the comprehensive partnership with the country.

Expressing her sympathy over difficulties facing the Venezuelan government andpeople, the Vice President said she believes that Venezuela will soon overcomethese challenges to stabilise and construct the nation.

She suggested Vietnam and Venezuela step up delegation exchange at differentlevels, and implement cooperation mechanisms such as the Inter-governmentalCommittee and political consultations between the two foreign ministries.

Venezuela has played an active role in the NAM, Thinh said, suggesting thecountry make more contributions in order to maintain principles of themovement.

For his part, President Maduro stressed that Venezuela attaches importance tocooperation with Vietnam within the bilateral framework and at multilateralforums like the United Nations and the NAM.

He pledged to further facilitate the operation of Vietnamese businesses inVenezuela in such areas as agriculture, food and oil and gas.

Meetingwith President of the Supreme People’s Assembly of the Democratic People’sRepublic of Korea (DPRK) Choe Ryong Hae, Thinh lauded delegation andpeople-to-people exchanges, as well as cultural and sport ties between the twocountries, which have significantly contributed to consolidating theirtraditional friendship. 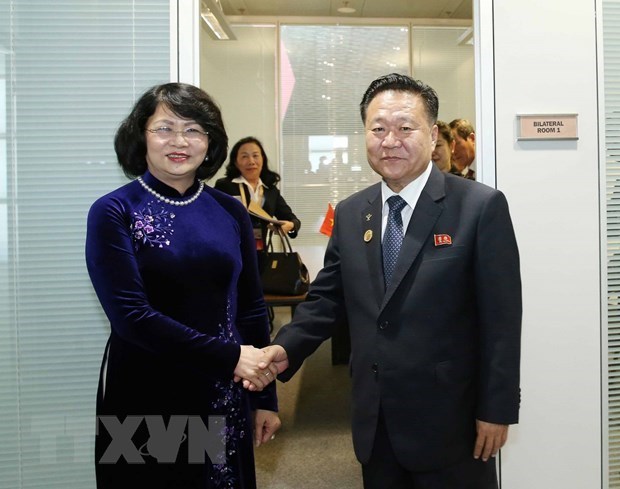 The Party, State and people of Vietnam always treasure the time-honouredrelationship, she said, highlighting the success of the official visit toVietnam by DPRK leader Kim Jong-un last March.

Vietnam and the DPRK should boost cooperation in line with international lawand relevant resolutions of the UN Security Council, she suggested.

Vietnam always supports the DPRK’s economic reform and development, and standsready to share its experience in national construction and development with thecountry, the official said.

The two sides agreed to increase all-level delegation exchanges, especiallybetween their citizens and youths, towards the celebration of the 70thanniversary of the bilateral diplomatic ties in 2020.

In reply, Choe praised Vietnam’s role in promoting dialogues between concernedparties on the Korean peninsula, especially the organisation of the secondUS-DPRK in Hanoi last February.

At the meeting with President of the Pan-African Parliament (PAP) Roger NkodoDang, Thinh said Vietnam attaches importance to the role and position ofAfrican nations and the African Union (AU), and wishes to establish an officialrelation with the union.

Vietnam is willing to share its experience and cooperate with African nationsin the areas in which it has strength and African nations have demand,particularly agriculture, IT, education and health care.

She thanked African countries for backing Vietnam’s role as non-permanentmember of the UN Security Council for 2020-2021, and pledged that Vietnam willmake all-out efforts to constructively and responsibly contribute to peace andstability in Africa when it assumes the post.

The PAP President noted his hope for stronger cooperation between the AU andVietnam in the time ahead.

Regarding the East Sea issue, leaders of Venezuela, the DPRK and the PAP sharedthe stance of Vietnam and the Association of Southeast Asian Nations (ASEAN) onmaintaining peace and stability, ensuring security, safety and freedom ofnavigation and aviation in the East Sea, and settling disputes in the East Seaby peaceful measures in line with international law, including the 1982 UnitedNations Convention on the Law of the Sea (1982 UNCLOS), thus contributing topeace, cooperation and development in Asia-Pacific and the world at large./.

The 18th Non-Aligned Movement (NAM) Summit wrapped off in Baku, the capital of Azerbaijan, on October 26 by adopting a series of important documents.

The event, which drew the participation of representatives from 120 NAM member countries, observers and international organisations, adopted a final document of the summit; the Baku Declaration; a declaration on the Palestine issue; and a message of gratitude toward Azerbaijani Government and people.

These documents reiterated the value and importance of the Bangdung principles, as well as the effort to boost NAM’s intra-bloc solidarity in contribution to maintain international peace and security and boost economic cooperation and disarmament, among others.

At the summit, NAM leaders lauded the building of the ASEAN Community for a peaceful, stable and growing region.

They acknowledged ASEAN member states’ concern over complicated developments in the East Sea and called for the settlement of disputes through peaceful measures in line with international law, including the 1982 United Nations Convention on the Law of the Sea (UNCLOS).

Vice President Dang Thi Ngoc Thinh represented Vietnam at the two-day summit. In her statement, Thinh said Vietnam will always adhere to NAM principles and goals, and is willing to join hands with other member countries to foster intra-bloc solidarity and cope with challenges facing the movement in a comprehensive, timely and effective manner.

Established in 1961, NAM is dedicated to representing the interests and aspirations of developing countries. It now consists of 120 members and 17 observer countries, and becomes an organisation with the second highest number of members only after the United Nations. Vietnam joined the movement in 1976./.VNA