Chairing the meeting between the Government’s permanent members and the national steering committee for the COVID-19 fight, he said in this third phase, there are more people in quarantine.

Citing the Health Ministry as predicting that the outbreak will reach its peak in Vietnam in about late April, he voiced concern about the fact that large gatherings still occur. Besides, there are also infection risks among those at quarantine centres.

Requesting stronger actions, PM Phuc ordered close control of exit and entry by road, railway and air be continued, concentrated quarantine pushed ahead regardless of how much it costs the State, self-quarantine ensured in line with regulations, and safety for medical workers and other staff engaging in the combat guaranteed.

He stressed that the next 20 – 25 days are a big challenge to the fight in the country, so concerted and stronger measures must be taken.

The leader appreciated moves by all-level authorities, sectors and the whole political system in the recent past, considering the unanimity, joint efforts, seriousness and robustness, particularly the coordination from the public, as critically important to the fight.

PM Phuc further requested unnecessary services, especially restaurant and karaoke ones, to be shut down so as to minimise crowded gatherings, and called on places of worship not to organise events with a large number of people.

Regarding air transportation, he assigned the Ministry of Transport to take effective measures, even banning flights to Vietnam if necessary, while closely controlling domestic flights as well as rail and road transport to prevent virus spread.

He also told the Ministry of Health to promptly purchase quick test kits and carry out rapid testing at quarantine centres and in the community to screen infected people and minimise infection risks.

As of March 23 evening, the number of COVID-19 patients in Vietnam had reached 122, 17 of whom have recovered.

PM sympathises with Japanese over loss caused by COVID-19

Prime Minister Nguyen Xuan Phuc on March 23 sent a letter to his Japanese counterpart Shinzo Abe, expressing sympathies for the Japanese people over the losses caused by COVID-19 pandemic.

In the letter, he also lauded efforts by the Japanese Government and people in epidemic and control and suggested enhancing cooperation in the field.

In the spirit of the Vietnam – Japan extensive strategic partnership and in Vietnam’s capacity as a coordinator of the ASEAN – Japan relations for the 2018 – 2021 period, the ASEAN Chair 2020 and a non-permanent member of the United Nations Security Council for the 2020 – 2021 tenure, the PM proposed that the two countries continue working closely together to strongly develop the ASEAN – Japan ties, effectively promote Vietnam – Japan relations and cooperation in the fields of politics, diplomacy, investment, trade and people-to-people exchange, as well as at regional and global forums./.

As COVID-19 concerns are growing, many countries in Asia have made stronger actions in efforts to contain the pandemic.

On March 23, Indonesia’s Jakarta capital closed cinemas and other entertainment venues to slow the spread of SARS-CoV-2, the virus that causes COVID-19.

A spokesperson of the Indonesian National Police noted this country also deployed 465,000 police officers nationwide to disperse any public gatherings “for the sake of public safety”.

Meanwhile, Indonesian President Joko Widodo said doctors and other medical staff would receive bonuses ranging from 5 million rupiah to 15 million rupiah (300 – 900 USD) per month in regions that have declared an emergency.

In Myanmar, local media reported that its Ministry for Health and Sports has urged the country’s migrant workers returning from Thailand to self-quarantine as it doesn’t have sufficient infrastructure to quarantine a large number of people at the same time.

Union Minister for Health and Sports Myint Htwe advised them to stay at home for 14 days to prevent spread of the viral disease among their communities and to report respective healthcare centres every day during this period.

In Malaysia, this country will consider extending its movement control order (MCO), which is set to expire on March 31.

Prime Minister Muhyiddin Yassin said the National Security Council will make consideration according to effects of the MCO, which began on March 18.

He cited police as reporting that nearly 90 percent of the population have complied with the MCO, hoping this rate will reach 100 percent.

According to him, the Malaysian Government decided to add 600 million ringgits to purchase medical equipment and materials and recruit more healthcare workers to cope with COVID-19.

On March 23, Malaysia recorded 212 COVID-19 cases, bringing the country’s total to 1,518. This is the highest number of new cases recorded in a day. The pandemic has so far killed 14 people in Malaysia./.

The US highly evaluates efforts made by the Vietnamese Government in the prevention and control of the novel coronavirus (COVID-19) pandemic, describing them as drastic, transparent and effective.

The US is considering the import of some medical supplies and equipment from Việt Nam to serve epidemic prevention in the US.

In an interview on the co-operation between the two countries in the fight against the pandemic, Vietnamese Ambassador to the US Hà Kim Ngọc said Việt Nam-US cooperation in response to the COVID-19 outbreak has witnessed many positive results.

Since the end of January, the health agencies and experts of the two countries have exchanged information and data to deal with the disease.

The Vietnamese Embassy has established a regular exchange channel with the Department of Health and the US’ Centers for Disease Control and Prevention.

The US is considering the import of some medical supplies and equipment from Việt Nam. These are products that Việt Nam has sufficient production capacity to serve domestic health and export, contributing to the joint efforts of the international community in the prevention of the pandemic.

This will create more opportunities for Vietnamese businesses to access and boost exports to the US market, Ngọc said.

Recently, the US Government has announced the Emergency Reserve Fund for Contagious Infectious Diseases at the US Agency for International Development (USAID) would allocate the assistance loan of US$37 million to help countries in the region in the fight against the pandemic, including Việt Nam.

From the multilateral perspective, the US said it highly appreciated Việt Nam's role as the ASEAN Chair in 2020. It would discuss with Việt Nam and other ASEAN members to promote ASEAN-US cooperation on health issues and the prevention of the spread of the COVID-19. VNA/VNN/VNS 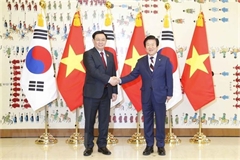