National Assembly Chairwoman Nguyen Thi Kim Ngan affirmed Vietnam’s external policy of treasuring ties with the US during a reception in Hanoi on April 18 for US Senator Patrick Leahy, Vice Chairman of the US Committee on Appropriations. 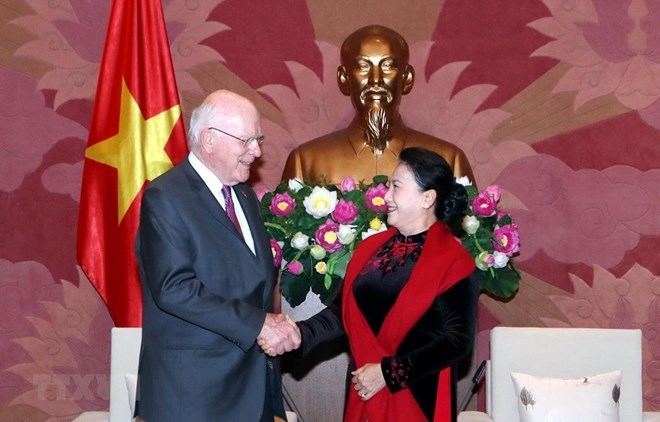 The NA Chairwoman said Vietnam wants to strengthen their bilateral comprehensive partnership in a more practical and effective manner.

Lauding the US’s important role in maintaining peace, stability, cooperation, and prosperity in the region and the world, she expressed her delight that US President Donald Trump has come to Vietnam twice since the beginning of his tenure, along with the exchange of high-level visits, contributing to promoting all-round Vietnam-US links.

She hoped that during the visit, both sides would discuss ways to boost ties between their two nations and, in particular, between the Vietnamese National Assembly and the US Senate.

According to her, Vietnam-US ties are growing in the spheres of politics, economy, trade-investment, science-technology, culture-education, and national defence-security. The US is also one of the top destinations chosen by Vietnamese youth for further studies.

Vietnam always considers the US one of its most important partners in terms of economy and trade, she said.

The host said that political stability and social safety and order all contribute to giving Vietnam an edge in attracting foreign investors. At present, foreign direct investment (FDI) attraction is one of the bright spots in Vietnam’s economic landscape with the world’s leading corporations active in the country.

With access to 12 free trade agreements (FTAs), Vietnam is refining its policies and laws, while building key infrastructure for national development, she said.

Leahy, for his part, expressed wishes to learn about Vietnam’s current policies as well as bilateral cooperation opportunities in the near future.

Several senators said the US is ready to partner with Vietnam in its development process, adding that although the US has not joined the Comprehensive and Progressive Agreement for Trans-Pacific Partnership, they hoped an exclusive FTA between Vietnam and the US could be conceived in the future. 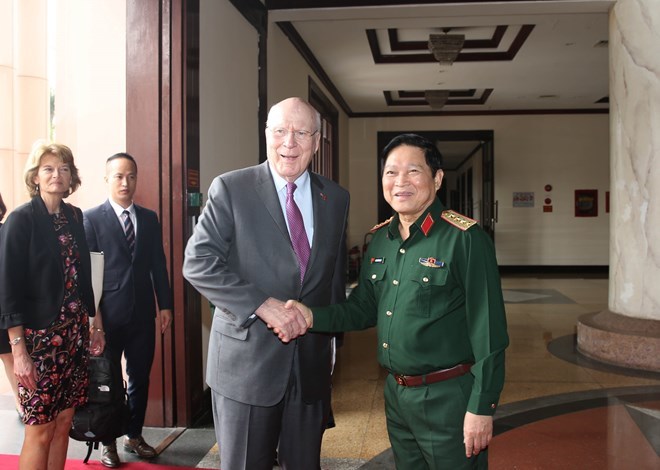 Politburo member, Minister of National Defence Ngo Xuan Lich hosted a reception for a Senate delegation from the US led by Vice Chairman of Appropriations Committee Senator Patrick Leahy in Hanoi on April 18.

The General expressed his belief that the visit will help promote the comprehensive partnership between Vietnam and the US.

He spoke highly of Senator Patrick Leahy’s contributions to the bilateral cooperation in addressing war aftermaths, and hoped the US Senator will contribute more to the implementation of the dioxin detoxification project at Bien Hoa Airport in the southern province of Dong Nai, following the success of a similar project at Da Nang Airport in the central city of Da Nang.

Senator Patrick Leahy expressed his pleasure to come back to Vietnam and said his trip aims to contribute to developing the bilateral relations.

He pledged to do his utmost to ensure the success of the dioxin detoxification project at Bien Hoa Airport.

The official website of the 13th National Congress of the Communist Party of Vietnam (CPV) was launched on October 3, at daihoi13.dangcongsan.vn.

The Vietnamese Government resolved to record GDP growth of 2.5-3 percent this year at its recent monthly meeting, Minister and Chairman of the Government Office Mai Tien Dung told a press conference on October 2.

Recovering and Building Back Better as a Region: ASEAN Chief
POLITICSicon  03/10/2020

Secretary-General of the Association of Southeast Asian Nations (ASEAN) Dato Lim Jock Hoi has written an article about the region’s COVID-19 and economic situation. The following is the full text of the article.

Vietnam wants code of conduct (COC) negotiations for parties in the East Sea between Southeast Asian nations and China to resume soon, after months of disruption caused by the COVID-19 pandemic, a spokesperson has said.