Big violations of principles made by the Electricity of Vietnam (EVN) have been found by the government inspectors. Economists believe the power group connived together with others to pocket people’s money.

VietNamNet Bridge – Big violations of principles made by the Electricity of Vietnam (EVN) have been found by the government inspectors. Economists believe the power group connived together with others to pocket people’s money. 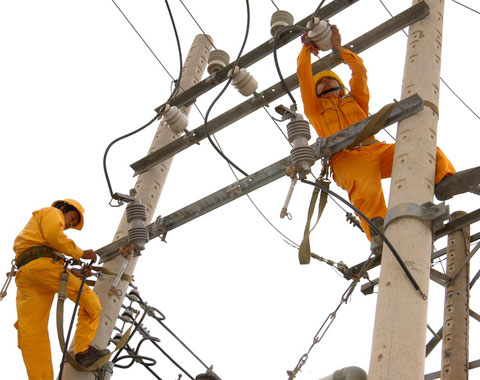 The government inspectors have released a report showing that EVN not only made wrong investment deals in non-core business fields that caused big losses to the group, but also wrongly entered in the accounts unreasonable expense items. The losses from the investment affairs have been counted as the expenses when calculating the electricity selling prices.

According to Nguyen Minh Phong, a well-known economist, one of the most serious wrongdoings the government inspectors have found is that the power group made investment in non-core business fields with the huge capital which is even higher than the group’s chartered capital.

By the end of 2011, EVN holdings company had invested VND121 trillion in non-core business fields, much higher than its chartered capital of VND77 trillion.

While EVN poured huge capital into investment projects, it could not make any dong of profits, but incurred the loss of VND2.195 trillion. Subsidiaries have been asked by the holding company to take loss to “legalize” the company’s losses. The Southern Power Corporation, for example, has been assigned the task of taking the loss of VND1.2 trillion.

According to Phong, the two wrongdoings alone are serious enough for the government to dismiss the leaders of the power group.

Especially, the conclusion by the government inspectors that EVN made mistakes when calculating the electricity selling prices has raised a wave of anger in the public.

When inspecting the five power plants which became operational in 2011, inspectors found out that the production costs of the plants were higher than the approved retail prices, though the costs did not include the transmission, distribution and other expenses.

The government then decided that the average electricity price was VND1,242 per kwh. However, the production cost of the Dong Nai hydropower plant was VND2,730.77 per kwh, while the figures were VND1.178.4 for Song Tranh and VND1,011.85 for Dai Ninh plants.

Ngo Tri Long, a price expert, pointed out that it was quite abnormal that EVN could set the wholesale prices higher than the approved prices.

“Why did the other power corporations accept to buy electricity at the high prices, ignoring the price frame set up by MOIT?” Long questioned.

“I believe that EVN and power corporations colluded with each other to pocket money,” Long said.

“I don’t think that enterprises would accept to buy products at high prices, if they don’t have to,” he added.

Dr. Le Dang Doanh, also a well-known economist, pointed out that EVN has been cheating people for a long time when it, reasoning the coal and input material price increases, repeatedly raised the electricity retail prices.

“EVN must give explanations about the government inspectors’ conclusions. It also needs to show the input costs for the electricity production,” Doanh said.

He also called on MOIT and the Ministry of Finance to explain why EVN could make such the wrong things.