As powerful women in the financial-banking industry of Vietnam, they have steered their banks to overcome difficulties to achieve successes.

Governor of the State Bank of Vietnam Nguyen Thi Hong 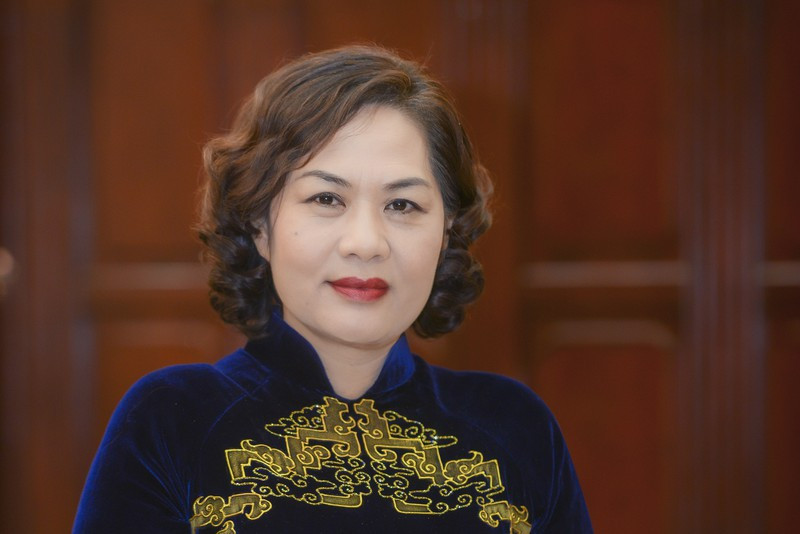 In November 2022, Ms. Nguyen Thi Hong became the first female Governor in the history of the State Bank of Vietnam (SBV). Ms. Hong was born in 1968 in Hanoi, and holds a Master's degree in Development Economics. She joined the SBV in 1991.

From 1991-1993, she was a specialist of the Foreign Exchange Management Department. From November 1993 to April 2008, she worked for the Monetary Policy Department (SBV).

From August 2014 to November 2020, she was Deputy Governor of the State Bank of Vietnam. 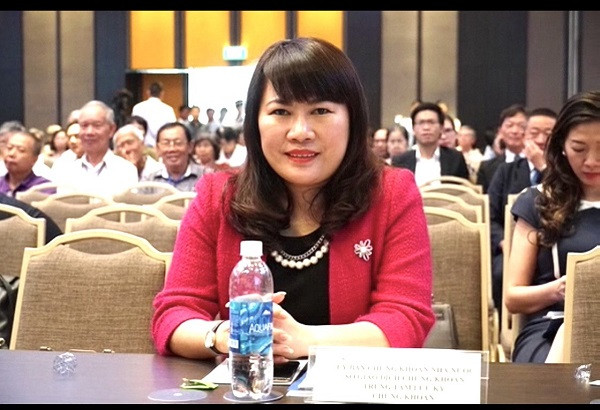 Ms. Tu was elected as the new Chair of Eximbank in February 2022.

Before becoming the General Director of Nam A Bank, Ms. Tu was known as one of the leaders with potential at Sacombank.

Tu also served as Vice President of Khanh Hoa Young Entrepreneurs Association and won the 2015 ASEAN Entrepreneur Award. She was also a member of the Board of Directors of Ninh Hoa Sugar Company. Before returning to Vietnam to set up a business, she had nearly 20 years of doing business abroad. Thao started her business as a distribution agent of electronics, office machines, consumer goods, natural rubber...

Returning to her homeland, she built VietJet Air with the desire to bring Vietnam to the world and pull the world closer to Vietnam. The airline's first flight took off on December 24, 2011, from Ho Chi Minh City to Hanoi. Up to now, Vietjet Air holds a large market share in domestic air transport and is strongly developing its international flight network.

Among Vietnamese businessmen, Thao is one of the few who have been honored many times on a global scale.

On March 9, 2017, Forbes magazine announced the list of female billionaires in the world, recognizing Thao as the first female billionaire in Vietnam and Southeast Asia, with an estimated fortune of about $1.7 billion. As of March 7, 2021, Forbes estimated that Thao owned $2.8 billion.

On the Vietnamese stock exchange, Thao is always among the richest people.

In addition, Bloomberg once rated her as one of the 50 typical global leaders.

According to the latest update from Forbes, with an increase of US$3.1 billion in assets, Ms. Nguyen Thi Phuong Thao has become the 987th richest person in the world. Among female billionaires, Thao is the 119th richest person. Ms. Diem (born in 1973) has been working at Sacombank since 2002. She worked at various positions at Sacombank before being appointed Sacombank CEO in July 2017. She started restructuring the bank under the support of the Board of Directors. Since then, Sacombank has had a great change in business results after a long time of difficulties.

She is one of the few women holding the role of General Director in the current Vietnamese banking system.

Before leading the Bank's Executive Board, Ms. Diem was the Deputy General Director in charge of debt collection, one of the key activities of Sacombank in accordance with the restructuring project approved by the State Bank of Vietnam.

After nearly five years of restructuring, under the management of Ms. Diem, Sacombank has achieved positive results. 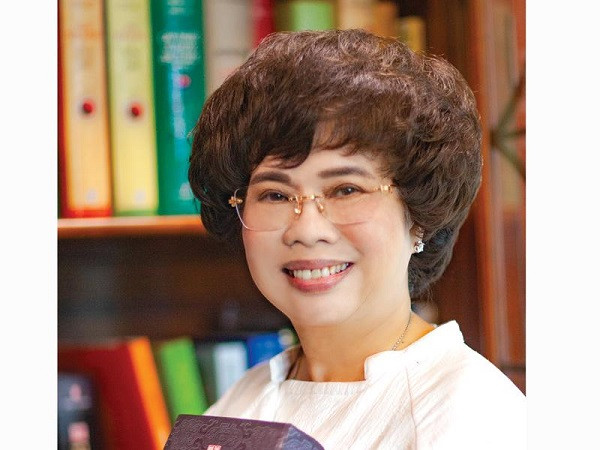 Entrepreneur Thai Huong is known as "Asia's most powerful woman".

At the 10th Patriotic Emulation Congress 2020, she was one of 13 people who were granted the Labor Hero in the renovation period title.

In 1994, she founded Bac A Bank with some of her associates. In 2009, she built her own dairy brand by raising and producing cow's milk with Israeli technology in her hometown of Nghe An.

With the explosive development of TH Group and Bac A Bank, in 20215 - 2016, Ms. Thai Huong was several times named on the list of Top 50 most powerful businesswomen in Asia by Forbes. In 2019, she received the ASEAN Powerful Businesswoman Award. Ms. Le Thi Bang Tam is the Chair of HDBank and also the Chair of the Vietnam Dairy Products Joint Stock Company (Vinamilk).

Before joining HDBank, Ms. Tam held many key positions in the financial industry such as Deputy Head of Accounting Department of the Ministry of Finance; Deputy Director, Director, General Director of the State Treasury; Deputy Minister of Finance, Chair of the State Capital Investment Corporation (SCIC).

Ms. Tam obtained a PhD in Economics with a major in finance and credit in the former Soviet Union. She also holds a Certificate in International Finance from North University London. For Ms. Nguyen Thi Nga, Chairwoman of BRG Group, "always being proactive before any change" is the key to success.

Nga - Chair of BRG Group and Standing Vice Chair of SeABank - is one of the most influential businesswomen in Vietnam. This "female general" has developed BRG Group from import and export activities to the fields of banking, hotels, golf courses and many other businesses.

Nga has continuously appeared in the list of influential women of Forbes Vietnam. She started her business in the early 1990s. In 1993, she and her husband established BRG Group, a multi-industry investment group and one of the largest private enterprises in Vietnam.

Under her leadership, BRG Group has pioneered in many fields such as golf, hotel, real estate. In addition, she invests in a wide range of fields: finance - banking, import and export, retail, tourism and agriculture.

Nga is considered an inspiration to the next generation of female entrepreneurs, that women can confidently build businesses and overcome difficulties to take their businesses to high achievement levels.

In 2006, after divesting from Techcombank, Nga invested in and became the Chair of SeABank.

In early 2019, she left the position of Chair of SeABank to become Standing Vice Chair. In addition to SeABank, she participates in the Board of Directors/Executive Board at a series of businesses in the "ecosystem" of BRG Group. Ms. Tran Thi Thu Hang (born in 1985), Vice Chairwoman, holding the title of Chairwoman of Kienlongank for the 2018-2022 term. Hang is currently the youngest female bank chairwoman in Vietnam.

She was named CEO of Sunshine Group in March 2019 when she was 34 years old. Hang is also the Chair of SIPT Investment Joint Stock Company. She joined KienlongBank as Vice Chair from February 2021.

In 2021, KienlongBank recorded more than VND 1,010 billion in total profit before tax and exceeded the target set out at the beginning of the year. 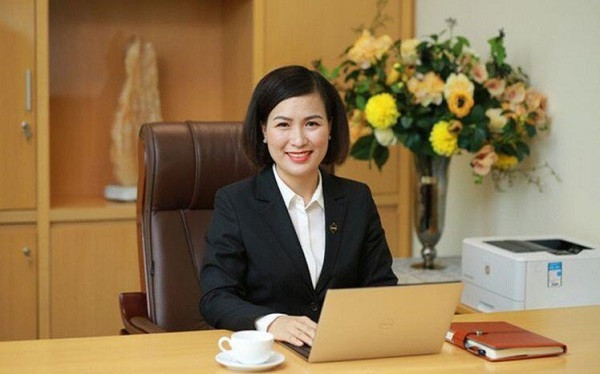 At the Extraordinary General Meeting of Shareholders in 2021, NCB elected Huong as the Chairwoman of the Board of Directors.

Huong was born in 1980, graduated from the National Economics University in 2001, received the certificate of Independent Auditor in 2005 (CPA - Ministry of Finance), graduated with a master's degree in business administration at the French-Vietnamese Center for Management Training (CFVG) in 2012 and was awarded the Certificate of Certified Public Accountant in Australia in 2014 (CPA Australia).

Ms. Huong has more than 20 years of experience in the field of audit - banking - finance - business management.