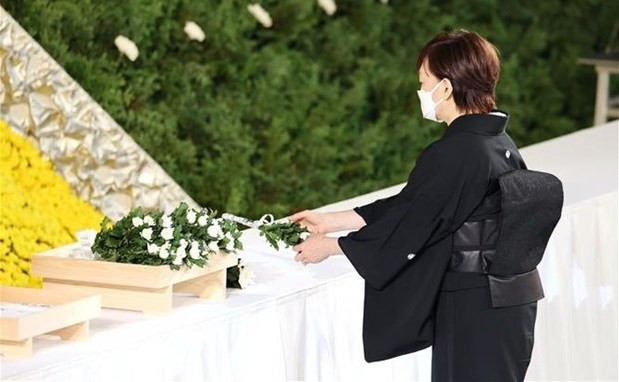 Abe Akie lays flowers in memory of late Japanese Prime Minister Abe Shinzo at his state funeral in Tokyo (Photo: Kyodo/VNA)
Highly appreciating the late PM's efforts for the development of Japan and the happiness of Japanese people, Phuc affirmed that Abe was loved by many international friends, including Vietnamese people.

He said he treasures the special affection and contributions of Abe and his wife toward the Vietnam-Japan cooperation relationship.

For her part, Abe Akie said she will continue to pay attention to and support the further development of the countries’ ties in the time to come.

While in Japan to attend the state funeral of late PM Abe in Tokyo between September 26 and 28, Phuc hosted receptions for a number of Japanese friends and Vietnamese representatives in Japan.

Speaking at the meetings, on behalf of leaders of the Party, State and people of Vietnam, he expressed his deep condolences on Abe’s death, saying it is a great loss for not only the Liberal Democratic Party (LDP), Government, National Diet and people of Japan, but also to the Vietnam-Japan friendly cooperation relationship.

The guests affirmed that they will continue to support and promote cooperation between the nations’ parliaments, the exchange of their parliamentarians and young leaders; promote the bilateral collaboration in economy-trade, ODA, and labour; and come up with policies in support of Vietnamese interns and workers in Japan. Matsuzawa affirmed that FEC is determined to contribute to deepening the countries’ relations and people-to-people exchanges. 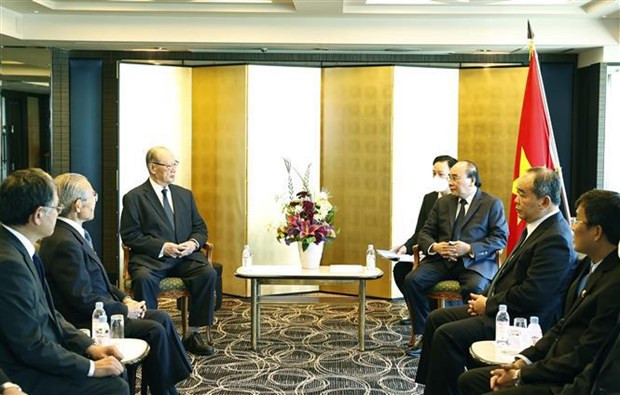 The priorities included creating conditions for market expansion for each other's products; transferring technology in agriculture, processing, wastewater treatment, health, environmental protection; and increasing the reception of Vietnamese students, high-quality workers and technical interns. The President’s schedule in Japan also included a reception for a group of outstanding Vietnamese intellectuals in Japan.
On the afternoon of September 28, Mr. Phuc and his entourage left Tokyo for Vietnam./.
Source: VNA