According to state management agencies, Article 37 of the law stipulating association in press activities is vague, with no specific regulations in the form of association (joint venture contract, business affiliate contract… etc), the requirements on conditions, capability of partners, and on procedures.

Some affiliate television programs, mostly entertainment items, game shows and reality shows, have not been strictly controlled, causing mistakes in information content, such as objectionable images and dialogue, lack of aesthetics and educational orientation.

Some partners take unfair advantage of affiliate activities to establish media channels of their own, using logos similar to official television channels, which lead to misunderstanding in society.

Regarding electronic information, many magazines and news website make corrupt use of affiliate activities to ‘wash sources’ (information of private partners, but bears newspapers’ brands). In order to do this, they set up dependent specialized pages (a magazine has up to 7 dependent specialized websites), establish many representative offices, and leave all the work to the offices.

Benefits are unequal in affiliate relations

While this phenomenon is widespread and growing, the benefits that press agencies can get from affiliate relations are modest.

One of the manifestations of ‘press privatization’, according to the Authority of Press, an arm of the Ministry of Information and Communication (MIC), is economic benefit.

The privatization of press occurs when the benefits for press agencies are much smaller than the benefits that their partners can obtain.

A large newspaper, for example, has total annual revenue of VND120 billion a year. When the newspaper cooperates with a news website, the amount of money it receives from the partner is just VND2 billion.

The figure is much lower for smaller and less known newspapers.

Regarding other benefits, such as branding and training, the state management agency cannot see clear links between affiliation with media partners and branding of press agencies. The prestige of the newspapers does not increase when they cooperate with the partners.

Press privatization is a danger. There have been no official statistics about this, but it’s clear that only private partners can benefit from the activities.

Luu Dinh Phuc, director of MIC’s Authority of Broadcasting and Electronic Information, said at a workshop on the ‘newspaperization’ of magazines, news websites and social media, and the ‘privatization of press’ on March 31, that the phenomenon mostly occurs in television broadcasting. Some of them set up representative offices – ‘kingdoms’ of their own where they broadcast the content they want.

According to the Authority of Press, press privatization occurs when leaders of newspapers cannot control the benefits in the cooperation between newspapers and other economic sectors. As a result, the benefits brought by cooperation are not high and journalists have few benefits.

The problem is that press agencies don’t control the content created by their partners, i.e. private investors.

Many newspaper editors-in-chief don’t orient content production, don’t see the content before publishing, and “forget” the regulations on affiliation activities in the Law on the Press.

The solution to the problem is that press agencies must keep the right to control the content. They must orient the content for production rather than check content after information products are published. It is press agencies, not private investors, that are the helmsmen.

If so, newspapers and news websites, which have their own advantages, can cooperate well to produce content. This will help newspapers gain bigger benefits. 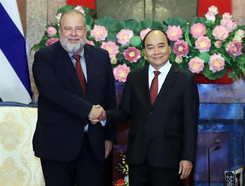 President Nguyen Xuan Phuc has affirmed that Vietnam always stands united with and supports fraternal Cuba amid complicated developments in the world.