After a long period of sinking to the bottom and causing big losses for farmers, the price of pepper, often called "black gold", has skyrocketed. 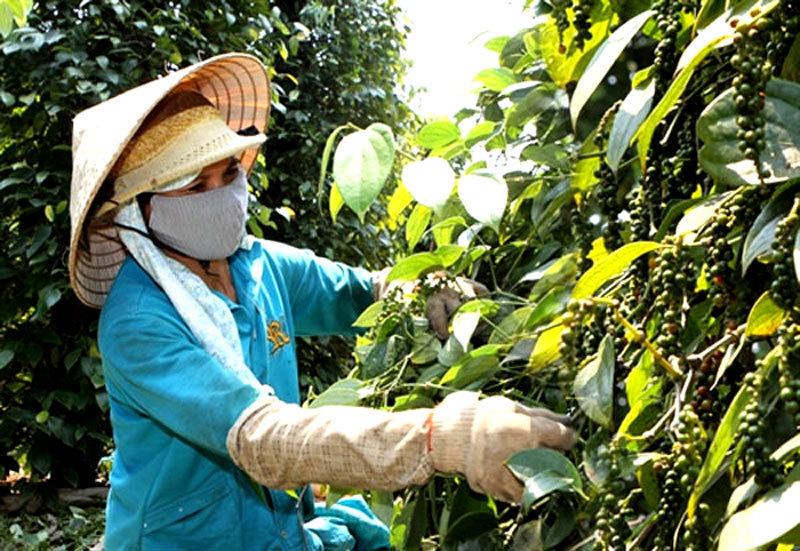 The image of ripening pepper fields going unharvested because of a lack of sales lasted for three years. But that has changed.

Farmers in pepper growing areas of Gia Lai, Ba Ria – Vung Tau and Dong Nai these days are busy picking pepper for sale as the prices are increasing sharply.

Nguyen Van Nam, a pepper grower in Lam San commune in Dong Nai province, said petty merchants have ordered at VND73,000 per kilogram, so he has had to hire 10 workers to harvest pepper for delivery.

Nam said pepper growers have been facing difficulties in the last few years because the price plummeted. Many farmers decided to chop down pepper trees to cultivate other crops.

In late February, the price was at VND50,000 per kilogram and he did not feel like harvesting. But the prices unexpectedly soared to over VND70,000 per kilogram recently. Farmers are rushing to harvest pepper and sell immediately, fearing that the price may go down again in some days.

With the current prices, he will make a small profit. “The harvesting will finish by the end of March. I hope that pepper prices will continue rising which allows us to earn big money to offset the losses incurred in the last two years,” Nam said.

Nguyen Tan Cong in Nam Yang commune of Gia Lai said he is happy as prices have increased. He has been trying to maintain his five hectares of organic pepper though prices fell in the last two years.

“The prices have skyrocketed since early March. Some farmers don’t even have pepper to sell,” Cong said.

In general, merchants pay VND10,000-15,000 per kilogram more for organic pepper. Cong said ‘clean pepper’ cultivated with a standardized process is more favored and businesses have collected all the pepper he has.

The price increases have also been seen in Central Highlands, the eastern part of the southern region, and Ba Ria–Vung Tau. Just within half a month, the price surged to VND70,000-73,000 per kilogram.

In Chau Duc district of Ba Ria – Vung Tau, for example, pepper is being traded at VND73,000 per kilogram. Some farmers said as this year’s output is lower than last year, the price will continue increasing.

The General Department of Customs reported that Vietnam exported 30,291 tons of pepper in the last two months, a decrease of 25.3 percent from the same period last year, while export turnover was $87.56 million, a drop of 6.5 percent.