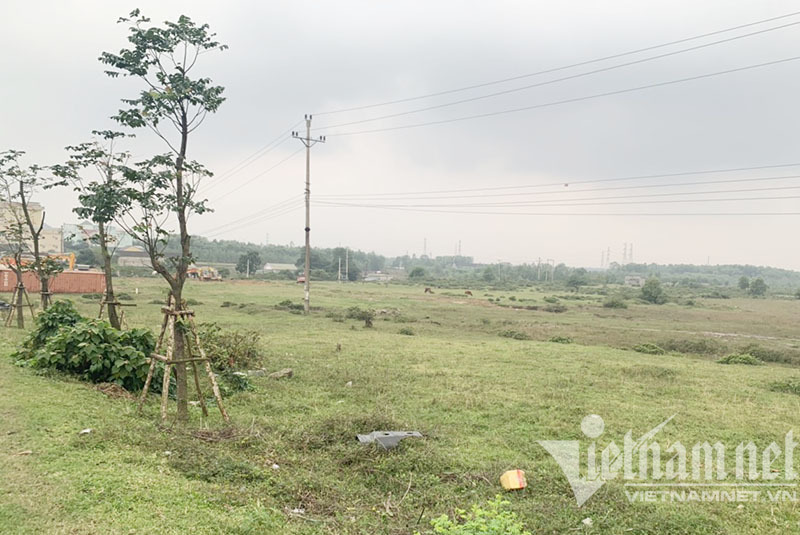 Land price hikes in Ky Anh district in HaTinh province are a hot topic. The owner of a beer shop near Vung Ang crossroads pointed to a land plot, saying: “The landlord wants to sell the land plot at VND600 million per sq m. It was just VND300 million earlier this year.”

In mid-September, an auction of 18 local land plots was organized, attracting 100 registrants. All of the land plots sold, bringing revenue of VND17.5 billion to the local budget, VND7 billion higher than the initial price.

Yen Binh’s people said they could not understand why the local land is so expensive and land plots have become ‘golden land’, attracting so many investors.

The same situation is seen in Bac Giang province. Land auctions have been organized and investors have been flocking to the province from everywhere.

Many investors scrambled to purchase land plots in Phon Xuong Town, and prices were pushed up to sky-high levels. A land plot sold at VND60 million per square meter, a record high price for the locality, which is less bustling than others in the province.

In Yen Dung district, land plots have starting prices 50 percent higher than the previous year, but still have attracted many investors.

According to the Ministry of Construction (MOC), some areas in Hoa Binh province have seen land price increases of 46 percent, Bac Ninh 20 percent and Hung Yen 26 percent.

Land prices have also soared in other markets, including Thanh Hoa, Thu Duc City and Can Gio District in HCM City, and Bien Hoa, Nhon Trach and Long Thanh in Dong Nai.

At VRES 2021, analysts reported that the number of people interested in the land market has recovered, nearly equal to that of May before the fourth pandemic wave broke out.

A report found that the level of interest in Bac Ninh market has increased by 41 percent compared with the previous year, while the figures are 45 percent in Hung Yen, 53 percent in Hoa Binh and 123 percent in Thai Nguyen.

In Hanoi, land auctions that were held recently all are hot events. Most recently, an auction of 25 land plots in X4 area of Mai Dich Ward in Cau Giay district caught the attention of hundreds of investors, despite the high starting prices of VND200 million per sqm.

The auction of four land plots in Thu Thiem urban area on December 10 has shaken the real estate market with sky-high winning prices.

There is a familiar name among the four winners – Ngoi Sao Viet. It is a subsidiary of Tan Hoang Minh Group which spent VND24.5 trillion to acquire the 10,059 sq m land plot.

The other three names, including Binh Minh Trading Co Ltd, which acquired a 5,000 sq m land plot; Sheen Mega, which acquired 8,500 sq m and Dream Public, which bought 6,466 sqm, are not well-known names.

Experts believe the current land fever is caused by speculation and the price increases are artificial. While confirming that real demand is high, they believe that there is the hand of speculators in the price fever.

Realizing the market demand, speculators have artificially pushed prices up to trap investors. News about urban land planning has caused the prices increase in localities.

The other reason is that many investors, who earn big money from other investment channels, now are seeking investment opportunities in real estate. Analysts have noticed cash flow from the gold and securities markets heading for real estate.

He said that land prices have soared within a short time because of unclear information about land use programming, the upgrading of suburban districts into inner city districts, and plans to build new urban areas and airports. This information has been exploited by speculators to push prices up.

First, it attracts investors’ resources into a land whirl, leading to a decrease in resources for investment and development in other business fields.

Second, land resources have been used for wrong purposes, which causes a big waste of resources, affecting economic development and causing uncertainties in localities.

Fourth, it leads to increases in housing development costs, thus making it more difficult to implement a low-cost housing strategy.

Fifth, it causes uncertainties to the real estate market nationwide.

Land fevers, apartment price escalation, new tendencies and land auctions were the key features of the real estate market in 2021.

Upward trend in prices predicted for housing market in 2022

The real estate market is predicted to recover and develop healthily in 2022 after experiencing a year of upheavals in 2021.