VietNamNet Bridge - Prime Minister Nguyen Tan Dung today posted an article advertising the investment climate in Vietnam on the blog of the World Economic Forum (WEF), where he made eloquent declarations of Vietnam’s stance on marine sovereignty.

VietNamNet Bridge - Prime Minister Nguyen Tan Dung today posted an article advertising the investment climate in Vietnam on the blog of the World Economic Forum (WEF), where he made eloquent declarations of Vietnam’s stance on marine sovereignty. Below is the full article. 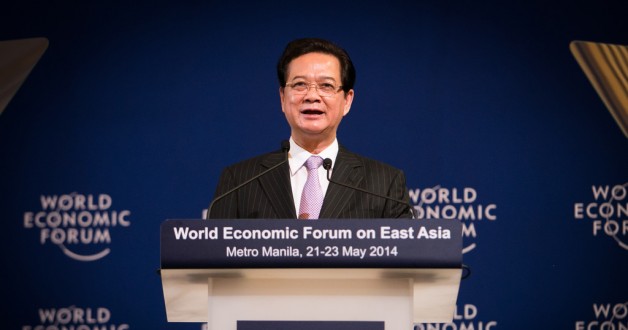 Why foreign investment in Vietnam is booming

Attracting foreign direct investment (FDI) has always been a key part of Vietnam’s external economic affairs. Vietnam already has many comparative advantages and a strong investment climate, but we are working hard to become even more appealing to foreign investors. We are doing so by vigorously renovating the business and investment climate, and by recognizing that the FDI sector is an integral part of the economy – essential to restructuring the economy and raising national competitiveness.

As of last month, there were more than 16,300 active FDI projects in Vietnam that have collectively pulled in a total of $238 billion. These investors came from 100 countries and territories, and many of them are some of the world’s leading multinational corporations. In 2013, FDI inflow exceeded $22 billion, an increase of more than 35% from 2012. The figures indicate that Vietnam has become a destination of choice for foreign investors.

So what explains this Vietnamese success story?

First, Vietnam has been securing socio-political stability, and is known to be one of the most dynamic economies. Economic growth between 1991 and 2010 averaged 7.5% each year and, despite the many difficulties the country faced between 2011 and 2013, GDP growth still rose by 5.6%. Several international forecasts suggest that this trend will continue in 2014-2015 and beyond.

Second, Vietnam is now in a period of golden population structure – 60% of its population are working age. It also has a favourable geographical location right at the heart of East Asia – home to a number of large and vibrant economies. Furthermore, the country is a market economy, a member of the WTO, and a party to multiple frameworks for international economic integration, including free trade agreements with partners both within and outside the region. In particular, the country is part of the Trans-Pacific Partnership negotiations. These factors all go some way to explaining why so many choose to invest in Vietnam – and should draw in more foreign investors.

Third, the Vietnamese government is committed to creating a fair and attractive business environment for foreign investors, and constantly improving its legal framework and institutions related to business and investment. The government has been working hard on restructuring the economy and its model for growth, as well as enhancing national competitiveness.

To add new chapters to this success story, the Vietnamese government is continuing to revitalize its business and investment climate. One way it is doing this is its work on three “strategic breakthroughs”: putting in place market economy institutions and a legal framework; building an advanced and integrated infrastructure, particularly transport; and developing a quality workforce. These should all be completed by 2020.

The government remains determined to fulfil its treaty obligations and promote the negotiation and conclusion of a new generation of free trade agreements. Vietnam views the success of FDI enterprises as its own success. As such, the government is committed to ensuring a stable socio-political environment, protecting the legitimate rights and interests of investors, and creating an enabling environment for FDI enterprises in the country.

In the medium and long term, Vietnam will continue in its efforts to attract and efficiently use FDI inflows to advance socio-economic development. The country will target “high quality” FDI inflows, focusing on FDI projects that use advanced and environmentally friendly technologies, and use natural resources in a sustainable way. It will also target projects with competitive products that could be part of the global production network and value chain.

International forecasts suggest that as the world economy recovers, FDI flows are returning to dynamic economies. Given the positive prospects for both global and regional economies, we are confident Vietnam will continue to find success in this area.