It was the first time they had both become national champions in individual and team events at the annual tournament. 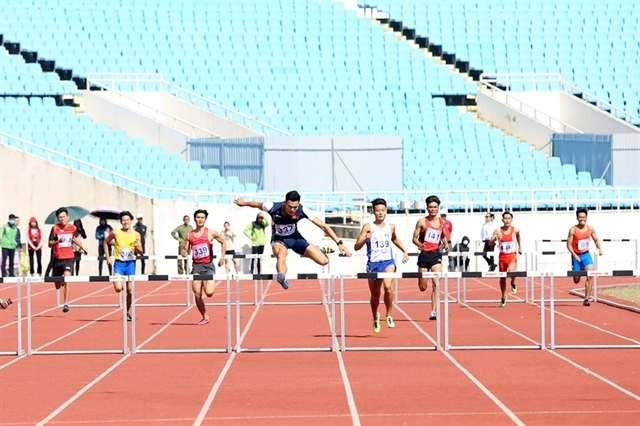 Lich (centre) on his way to winning the 400m hurdles.

They are among Vietnam’s major hopes at the 31st Southeast Asian (SEA) Games in Hanoi and the Tokyo Olympics next year.

Lich was born in 1993 to an ethnic Muong family in northern Thanh Hoa Province’s mountainous district of Ngoc Lac, two years before Lan.

They had expected to spend their lives farming before they were picked in the provincial athletics team after outstanding performances in school competitions. Lich was 18 at the time and Lan 16.

The duo began living far from home and take care of each other when their parents can’t.

“Being away from home means we have to do everything ourselves and help each other as much as possible,” said Lich. “It’s brought us really close together and helps us overcome the homesickness.”

At the national championships in 2012, Lich won 400m gold while Lan impressed with her title in the 400m hurdles. The wins put them in the national team and changed their lives forever.

“Together we compete for Vietnam and make our family proud,” said Lich, who is not only a key member of the team but also a good pacemaker, helping teammates, and especially his sister, reach the necessary pace during training.

SEA Games 2015 was Lich’s debut in regional competition, where he finished second in both the 400m and 400m hurdles while posting national records along the way.

He went to the Asian Games (ASIAD) in Indonesia in 2018 with high expectations, but a leg injury led to poor times and thoughts of retiring.

“It was the fourth time I’d had the leg injury in two months,” he remembered. “I just wanted to give athletics away. But my family and friends, and especially Lan, encouraged me and pushed me to get my fitness back.

“Which I did, and what I’ve achieved since is due to people’s help and my own efforts, though I’m still to reach my peak.”

After nearly a decade in athletics, Lich has won two Asian Grand Prix golds but not a SEA Games gold as yet.

“I never seem to have any luck at the SEA Games, despite winning Asian competitions,” the six-time national champ told Vietnam News.

“I’ve always been viewed as the favourite but keep missing out on that top podium.

“There are several tournaments in 2021, but my most important target is the SEA Games, where I want my first gold.”

The 1.75-metre-tall Lan has picked up titles since early in her running career, including three Asian Grand Prix wins, two Asian silvers, and one ASIAD gold and a silver, while setting national records in both the 400m and 400m hurdles.

Like her brother, though, Lan is yet to taste victory in an individual event at the SEA Games, bagging three silvers and a bronze in four appearances.

Last weekend she beat the veteran Nguyen Thị Huyen, the SEA Games defending champion, for the first time in both the 400m and 400m hurdles.

It gave the 26-year-old a great deal of encouragement.

“Beating her was partly due to luck,” she modestly told Vietnam News. “But it gives me confidence for upcoming events. I always think overcoming myself is the most difficult job, and I work with my coach to improve any weaknesses.

“I always push myself to run better and better and to do everything that others do. I haven’t had any success at the SEA Games yet but if I keep working hard I’m sure I can change the colour of the medal next year.”

Lan is also expected to appear at the Tokyo Olympics next July.

“She has the perfect body shape for a runner,” coach Vu Ngoc Loi said.

“She’s talented and also has principles and passion. She’s only slightly behind the Olympic standard time, which she’ll reach with proper training.”

Lan’s personal best in the 400m hurdles is a national record of 55.30sec, set at the 2018 ASIAD. That beats the Olympic standard of 55.40sec, but the tournament doesn’t count in qualifying.

“She has to fight hard to prove her talent on the track, but has always been our key athlete. She’s our weapon in attacking not only the Olympics but also other international competitions.”

Lan, Lich and their teammates in the mixed relay team have an even better chance of earning an Olympics slot.

They are currently ranked 17th in the world but need to break into the top 16 before June 29, 2021, to qualify for the Games.

The official countdown to next year’s Southeast Asian Games began on Saturday when representatives of regional countries met in Hanoi for a ceremony witnessed by thousands of local residents.