VietNamNet Bridge – The entrance fares of the three most famous caves in the National Park of Phong Nha - Ke Bang - a UNESCO World Heritage Site in Quang Binh province - increased on January 1, 2015. 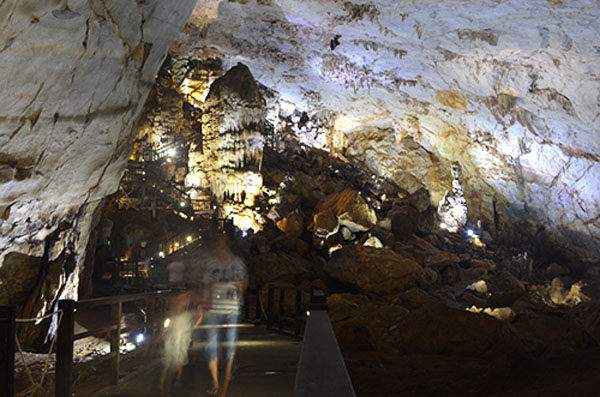 The entrance tickets to Phong Nha and Tien Son caves have increased from VND80,000 and VND40,000 to VND150,000 and VND80,000, respectively. Children under 1.3 meters tall are exempted from the fee. Prices of other services remain the same.

Phong Nha and Tien Son were the first two caves opened for tourists in Quang Binh while Thien Duong Cave was opened in 2010.

Phong Nha Cave is is 7,729 metres long and contains 14 grottoes, as well as a 13,969 metre underground river. While scientists have surveyed 44.5 kilometres of passages, tourists are only allowed to explore the first 1500 metres. It is the second biggest cave in Vietnam.

Thien Duong Cave is located on an elevation of 200 meters above the sea level. The cave was discovered by a local man in 2005 and 5 first km of this cave was explored by explorers from British Cave Research Association in 2005, the whole 31 km was explored and publicly announced by the British cave explorers. This cave is 31 km long, longer than Phong Nha Cave which had been considered the longest cave in this national park. The height can reach to 100 m and 150 wide. The limestone formation is also more spectacular than that of Phong Nha Cave. The British cave explorers were impressed by the beautiful and spectacular stalactites and stalagmites inside this cave and they named it Thien Duong Cave (Paradise Cave).

The access road and internal road of this cave was built by a local company (Truong Thinh Group) and the cave has been opened to tourists since 3 September 2010. The car parking is 1.6 km from the entry of the cave, and tourists will go by golf car or walk on a paved road to the cave mouth. Only 1 km is open to tourists.

Originally called Dry Cave, Tien Son Cave was discovered in April 1935 in the limestone mountain of Ke Bang. The Phong Nha - Ke Bang Caves consist of the Phong Nha Cave system, with 9 caves of various sizes and the Vom Cave system, with 8 caves of various sizes. Of which, spectacular Tien Son Cave is the most magnificent limestone cave in Vietnam and just opened in 2000.  It is about 400 metres away from the famous Phong Nha Grotto and at a height of 135 metres.

Tien Son Cave is more than 980 metres long. Going into the cave for about 400m, you will see an abyss, about 10m deep. Then comes another part of the cave, about 500m long, which is rather dangerous for walking. At present, nearly 400m of the cave have been installed with lighting system to make it safe for visitors.

The Cave looks marvelous inside with hundreds of stalagmites and stalactites of different sizes and shapes. Some look like a man or an animal, and there is one that looks like the Leaning Tower of Pisa in Italy. On the cave ceiling, there are glittering gold and silver-like veins. Some stalagmites produce an echoing sound when slightly knocked.

Limber Howard, Chief of the British Royal Team of Cave Researchers, who visited and made studies of the site, said that Tien Son cave may have been formed tens of millions of years ago. A river ran through the limestone mountain and eroded it. Then, huge rocks fell, separated the mountain and formed the cave. An underground river ran through the lower part of the mountain, creating Phong Nha Grotto. Thus, Tien Son Cave is older than Phong Nha Grotto and they do not link with each other. Geographical tectonics in Tien Son Cave are rather stable, so the cave is safe for visitors.

According to the People's Committee of Quang Binh province, the number of tourists to the three caves from January to October 2014 was about 750,000, and international visitors accounted for nearly 10% of the total.