Responding to the national tourism stimulus programme “Vietnamese travelling Vietnam” launched by the Ministry of Culture, Sports and Tourism, many businesses, travel agencies, restaurants, hotels, and other destinations have simultaneously reduced ticket prices and offered special deals to attract tourists, creating a domestic travel craze starting in May and expecting to last until the end of this year. 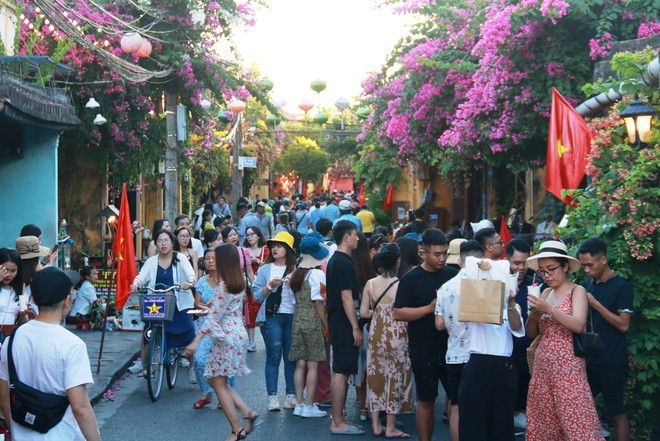 After more than 10 years as a ground officer at Noi Bai International Airport, Le Thu Phuong said that she had never witnessed a scene of crowded domestic flights from early morning to late night like in the past month.

She said, “There were long lines of people at the check-in area and the security control door. The crowded, noisy scene being repeated every day makes us surprised. The low-cost ticket promotion programmes and stimulating domestic travel seem to be dragging people to the airport.”

The strong stimulus from airlines has opened up co-operation between aviation, travel agencies, and hotels, creating attractive incentive programmes.

Ngoc Diep from Dong Da district in Hanoi has just decided to buy a ticket for a 5-star tour. “I chose a 3-day tour for three people at a 5-star resort on Phu Quoc, priced at just over VND13 million ($565) in total. When people are choosing low-cost airlines, they can even enjoy business-class lounge services at the airport,” Diep shared with VIR.

Diep said that her family did not prepare for the trip in advance, but the plane ticket price was too cheap to refuse and the resort price also dropped by 50 per cent, prompting her to quickly snap up the offer.

Since the end of stricter social distancing measures at the end of April, airlines and travel companies in Vietnam have continuously introduced new programmes and travel combos with super promotions. The recovery of domestic flights is a reason why airlines such as Vietnam Airlines, Vietjet, and Bamboo Airways are able to open more new routes and launch millions of cheap tickets to stimulate demand.

Currently, Vietjet continues to open and sell cheap tickets for only VND50,000-100,000 ($2-5). Meanwhile, Vietnam Airlines has just announced fares from only VND49,000 per trip, applied from now until the end of June.

In addition to a 20-30 per cent reduction in ticket prices during the peak summer travel season from June to August compared to last year, airlines are also more flexible in adjusting policies to support tourism businesses.

A survey by VIR showed that a series of large travel agencies have simultaneously launched attractive promotions, including instalment tours. From May to July, Vietravel has introduced Free & Easy products with savings of up to 50 per cent. Meanwhile, Saigontourist is discounting VND1.5-2.5 million for tours exploring the north of the country or sea tours.

“This is a golden time to travel as there are unprecedented cheap air tickets, hotels, and incentives like now,” said Nguyen Cong Hoan, general director of Hanoi Redtours.

However, despite the cheap tour prices, the quality of services remains guaranteed, and is even more advanced in some instances. Some famous destinations with high-class services such as Halong, Vung Tau, and Phu Quoc have started to show signs of increasing numbers of returning customers, and even tight booking schedules in weekends.

Although the main target of the domestic tourism stimulus programme is Vietnamese tourists, foreigners who are living, working, and studying in Vietnam can also join in. Instead of spending a lot of money to travel abroad, now they can fully experience the same high-class services at resorts and hotels managed by famous international corporations such as InterContinental, JW Marriot, and Hyatt with more reasonable prices.

Masayuki Manabe, a Japanese national living in Hanoi for nearly 10 years, said his family often spent a lot of money on trips to high-class resorts each year. However, since the stimulus programme for domestic tourism was launched, his family was able to go on two short-term tours, taking advantage of cheaper air tickets and resorts.

“Three trips now are just like one trip every year, so my whole family took advantage of discovering famous places in Vietnam. This July we will go to Ninh Thuan and in September we will travel to Con Dao,” Manabe said. “Many of my foreign friends also commented travelling within Vietnam now was the safest and most appropriate time.”

According to Tran Trong Kien, chairman of the Vietnam Tourism Advisory Council, there are more than one million foreigners in Vietnam and 20 million Vietnamese in need of international travel. Both groups are “stuck” in terms of travelling because international routes are mostly closed off.

Some tourism businesses have recently launched new products and constantly improved product quality to attract high-spending customers. Ha Nhan, owner of Sapa Eco-Home Mountain Retreat, said that his hotel focused on upgrading its services to promote this group after reopening. “They like the tranquillity and safety here. There are many guests willing to stay all week, and on weekends we are always out of room,” Nhan said.

Besides the promotion of domestic tourists, many destinations also launched large-scale stimulus programmes to attract high-quality tourists. Meanwhile, many high-end resorts in Nha Trang and Danang are offering discounted rooms and services to attract guests.

In Hanoi, nearly 61,000 suites and hotel rooms have witnessed reduced room, spa, and dining prices from 50-70 per cent. Hanoi Department of Tourism is also focusing on building new tourism products, much of it characterised by thousands of years of culture.

According to Nguyen Ngoc Thien, Minister of Culture, Sports and Tourism, Vietnam has many beautiful landscapes, diverse culture, attractive cuisine, and infrastructure for hotels and resorts not inferior to other developed countries, and prices are reasonable. However, low costs should not be the only deciding factor travellers should consider, with reputable travel agencies, ticket offices, and hotels being preferable in order make trips safe and full of positive experiences.