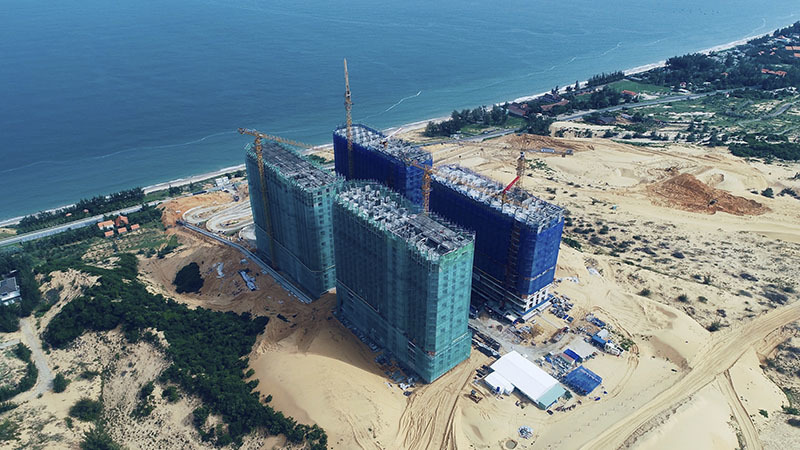 The real estate bond market has experienced two development stages. The first, from January to August 2020, witnessed a market boom. In the second stage, commencing from September 2020, the market has cooled and become more stable.

About VND350.9 trillion worth of corporate bonds were successfully issued in the first 10 months of 2020, an increase of 68.1 percent compared with the same period 2019, according to a report.

Real estate firms were the second biggest issuers, after banks, with VND63.2 trillion worth of bonds issued, which accounted for 19.4 percent of total bonds issued.

The real estate bonds have high interest rates of over 8 percent per annum.

In early September 2020, Apec, which is developing a series of projects, including Apec Aqua Park Bac Giang, Apec Mandala Bac Ninh and Apec Golden Valley Muong Lo, in cooperation with the US-based Windham Group, issued corporate bonds with the promised interest rate of 18 percent per annum.

Prior to that, TNR Holdings offered surprisingly high interest rate of 10.9 percent per annum, Sunshine Group 11 percent and Novaland 10.6 percent.

However, many investors have begun showing less interest in real estate bonds.

There was only one real estate bond issuance campaign in October 2020. The issuer was IDJ Vietnam, which issued VND20 billion worth of bonds on October 6. This is a real estate firm joining forces with Apec to develop resort real estate projects, mostly condotels.

The condotel market is in a recession because of investors’ failure to pay committed profits in late 2019 and the unclear legal status of condotels.

In fact, the bond issuance decrease is anticipated because of changes in the conditions that businesses have to satisfy to issue corporate bonds, applied since September 1, 2020.

The Decree 81 sets higher requirements and limitations on private offerings in an effort to restrict the issuance of bonds to private investors. It also sets higher responsibility for consultancy institutions and agents participating in issuance campaigns.

Analysts say that the adjustments aim to ensure the professional and healthy operation of the corporate bond market with clear differentiation between the public offering and private offering.

The Ministry of Finance has many times urged investors to be cautious when buying real estate bonds, saying that high interest rates are associated with high risks.

Le Hoang Chau, chair of HOREA, believes that the decree, with strict regulations on conditions to issue bonds, will better control risks and protect investors.

However, there are still problems. According to Chau, the proportion of private investors has increased rapidly. The number of these investors increased by 17.4 percent in July 2020 alone, higher than the average increase of 9.2 percent in the first six months of the year.

The problem is that most private investors lack sufficient knowledge and skills in investing in bonds, which is believed to be a ‘playing field’ for professional investors. And most of the investors tend to buy bonds with high interest rates.

Investors once rushed to pour money into condotel projects as they considered this an attractive investment channel when developers committed to huge profit rates of 12-20 percent. However, they later failed to pay the high profits they had committed.

Analysts warn that what happened in the condotel market may be repeated in the bond market, and issuers may not be able to pay the high bond interest rates to which they have committed.

Nguyen Tri Hieu, a finance expert, said that once the real estate bond market develops rapidly, this will lead to a competition in interest rate.

The quality of corporate bonds is not equal, which poses risks for investors. Investors have been advised to be cautious when buying the bonds with the interest rates twice as much as bank deposit interest rates.

The lack of prestigious credit rating firms in Vietnam has also been cited as an obstacle for the development of a transparent bond market.

At present, credit ratings are not a must for bond issuers. This explains why there is only one credit rating firm, Sai Gon Phat Thinh Credit Rating, which was established in 2017.

This growth was supported by expansion in both the government and corporate bond segments, stated the ADB.

The corporate bond market cooled in September and risks still persist for investors, according to securities companies.