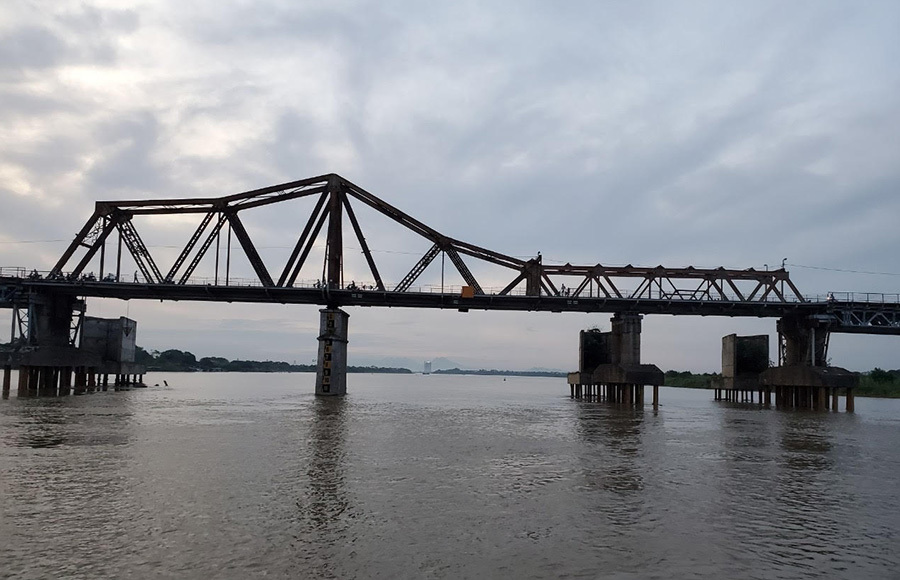 Hanoi is called the city of rivers as it exists on the sides of rivers, including Red River, the source of life and a reflection of the capital city's history.

Long Bien Bridge was built in 1902. Only after 84 years did Hanoi have more bridges – Thang Long and Chuong Duong. The 1998 city plan called for nearly 10 more bridges.

The transport development plan to 2030 was approved by the municipal authorities in 2016. In addition to existing bridges, it called for expanding or building nine bridges crossing the Red River.

The state budget therefore did not allocate capital for the bridges crossing Red River in the 2016-2020 periid. During that time, only the construction of Van Lang Bridge was implemented under the BOT (build, operate, transfer) mode, capitalized at $65 million (10 percent of Nhat Tan).

In late 2020, Hanoi completed the upgrading of Thang Long Bridge surface ($27 million) and kicked off the second stage, expanding the Vinh Tuy Bridge with capital from the state budget.

The city authorities estimate that the monetary collections from land in 2021-2023 may reach VND104 trillion, and a part of the money will be reserved to build these bridges.

However, traffic conditions have not improved. In the southern bank (inner city) area, there is still no road that links to the bridge piers. As for the northern bank, the bridge pier is in deserted, thinly populated places.

While other bridges have become overloaded by three to five times (Thanh Tri, Vinh Tuy and Chuong Duong), the investment efficiency and traffic capacity of the two bridges are very low.

For Tu Lien Bridge to become effective, it needs to connect Van Cao Road through the West Lake underground line (3 kilometers long, twice as long as Thu Thiem tunnel, with interpolated value of $1.7 billion). The total investment capital for the bridge and the underground line is up to $2.5 billion, or VND55 trillion.

Meanwhile, Hanoi can collect no more than $1 billion a year from land sales, and it needs to spend money on many items, not just on bridges.

Therefore, every bridge needs to enrich the city and not be a financial burden on the city and its residents.

The problem is what Hanoi needs to do to have money when it doesn’t need to sell land.

The Hanoi transport program has determined the location of Tran Hung Dao street underground space with a scale nearly the same as Thu Thiem tunnel. The estimated investment capital is $850 million, equivalent to Tu Lien Bridge. Despite the expense, it can bring major benefits.

On the southern bank, it connects underground with the Hanoi urban railway station, creating a 1 million square meter valuable service space and underground infrastructure for TDR (Transfer of Development Rights), worth up to billions of dollars.

On the northern bank, there would be a new Red River landscape space, 4 million square meters (five times larger than the old residential quarter) with a multi-billion dollar value. The TDR of the space alone would bring more than enough money to build the bridge, and link roads and urban railways that connect Hanoi’s central area and Long Bien district.

The current situation is that the Long Bien Bridge is on the verge of collapse, and the railway sector doesn’t have enough money to improve it.

It is necessary to "turn risk into opportunity" by consolidating the bridge combined with increasing the functions, and integrating national railways into urban transport. By doing so, the bridges will help the city become more prosperous.

Long Bien Bridge not only needs to be reinforced to prevent collapse, but also should be rehabilitated to create a new commercial hub, while the four railroad crossings through four streets (Tran Phu, Dien Bien Phu, Nguyen Thai Hoc and Nguyen Khuyen) need to be removed.

It is expected that Hanoi authorities in June will approve and issue the Red River subdivision planning, which will help the capital city become more spacious and modern.