VietNamNet would like to introduce an article by Ms. Pratibha Mehta, UN Resident Coordinator and UNDP Resident Representative in Vietnam about the challenges facing Vietnam's economic reforms.

The Vietnamese Government and the United Nations Development Program (UNDP) will jointly hold an international conference titled “Economic Reforms for Inclusive and Sustainable Growth: International Experience and Lessons for Vietnam” in Hanoi on 24 and 25 March to bring international lessons and experiences to assist Vietnam in furthering the economic reforms in its pursuit for more inclusive and sustainable growth.

The conference will attract more than 150 participants including policy makers from different line ministries and provinces, researchers from national research institutes, representatives from domestic enterprises, ambassadors from G20 and ASEAN countries, and representatives from multilateral development agencies such as the World Bank, IMF and ADB.

On this occasion, VietNamNet would like to introduce an article by Ms. Pratibha Mehta, UN Resident Coordinator and UNDP Resident Representative in Vietnam. 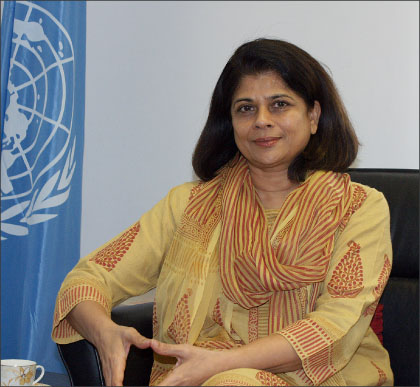 Vietnam’s economic performance following Doi Moi has been nothing short of extraordinary. Rapid growth has lifted literally millions of Vietnamese out of poverty. This was in no small part due to the Government’s strong stewardship in gradually opening up and liberalizing the economy. However growth has been extensive rather than intensive and driven by cheap labour and natural resources, with only limited improvements in productivity and technological uptake, and low value addition.

In recent years, Vietnam’s growth has slowed down and international competitiveness stagnated. Problems in the global economy have played their part, but one must examine the existing growth model for the fundamental drivers. Now, Vietnam stands at a new crossroads, one faced by many other middle-income countries.

Next week’s international conference Economic Reforms for Inclusive and Sustainable Growth: International Experience and Lessons for Vietnam here in Hanoi comes at a very important time. Leading experts from around the world and high-level Vietnamese policymakers will gather on 24-25 March to discuss how other countries have tackled economic reform, while at the same time ensuring greater inclusion and sustainability.

The Government also recognizes the formidable challenge at hand. It has committed to an ambitious reform plan for state-owned enterprises (SOEs), the financial sector and public investment. It is also undertaking an important review of thirty years of Doi Moi.

This will produce further analysis and forward thinking on Viet Nam’s development pathways. The conference seeks to strengthen these important processes from the angle of inclusion and sustainability to ensure longer-term human development progress.There is growing evidence that inclusiveness boosts growth. Inclusion means that everyone can benefit from – and participate in – the growth process. To get this right will require gender, geographical, urban and rural disparities to be addressed, as well as closing the gaps between majority and ethnic minority communities.

The picture for environmental sustainability and growth is more nuanced with both complementarities and trade-offs. As argued in the 2011 UNDP Human Development Report Sustainability and Equity – A Better Future for All, countries need to be aware of trade-offs in limiting emissions from industrialization. They must focus on complementarities such as reducing urban congestion and promoting energy efficiency. Sustainability must also be seen as a question of inter-generational equity as we all have a duty to preserve the planet’s wealth for future generations.

A key challenge is to re-think resource allocations and utilization. Answers lie in public investment and financial sector reform so that resources are freed up for productive sectors. Also,

SOE reform and private sector development efforts should contribute to higher efficiency and competitiveness of the economy. As many experts have highlighted, SOEs continue to receive a disproportionate amount of resources but generate relatively few jobs.

Greater integration into the global economy and insertion within global value chains present opportunities for both expanding trade and furthering the reform agenda. While it is vital to seize these opportunities, institutional and organizational capabilities must also be strengthened to address the challenges associated with greater integration.

Public service reform is central to this process. This includes more equitable provision of quality social services such as education and health. In Viet Nam, costs of these services are increasingly covered by households. This is an emerging cause of inequality that impedes inclusive growth. Successful middle-income countries have developed modern social protection systems which ameliorate risks, build resilience and, again, directly support inclusive growth.

Two decades ago, climate change thinking was an add-on to development policy. Today, it is an utmost priority, particularly for countries like Viet Nam which are most at risk from rising sea levels and extreme climatic events. Actions ought to include investing in climate change adaptation, community-based disaster risk management, but also phasing out fossil fuel subsidies, introducing carbon taxes and encouraging energy efficiency.

Experience from other countries has shown that resolving institutional bottlenecks and broader governance reforms are the foundation for transition towards a more productive, competitive –and ultimately more inclusive – growth trajectory. Challenges notwithstanding, Vietnam and its people possess inherent strengths – and one of the world’s most remarkable transition experiences – to address them moving forward.