The Law of the Sea of Vietnam took effect on January 1, 2013, creating a legal basis for the management, protection and effective use of the seas, islands and strengthening cooperation with other countries.

VietNamNet Bridge – The Law of the Sea of Vietnam officially took effect on January 1, 2013, creating a legal basis for the management, protection and effective use of the seas, islands and strengthening cooperation with other countries at the time Vietnam is positively integrating into the world.

In 2013, in the context of complicated developments in the world and the region, the territorial boundary-related issues were handled efficiently, contributing to protecting sovereignty and national borders and maintaining a favorable international environment for the development of the country.

Vietnam - China and the sea border 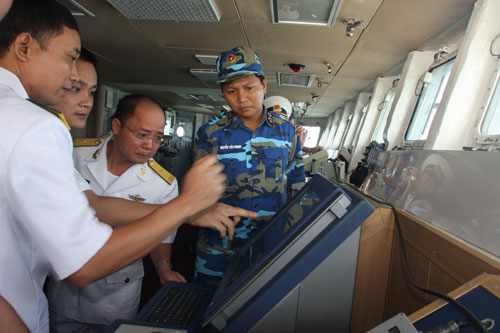 Vietnam - China joint patrols on the sea in June 2013.

In 2013, the two sides closely coordinated to implement agreements on Vietnam - China land border. The two mechanisms - land border joint committee and border representatives operated smoothly and efficiently. The situation along the land border was basically stable, order and security were enhanced, exchanges and border economic activities were expanded.

Vietnam actively communicated with China on the open and upgrade of border gates, and the completion of the connection of the two countries’ roads at the border gate. The two sides satisfactorily resolved a number of cases related to improper construction at the border areas.

In the complicated context of the East Sea, relevant bodies closely coordinated with each other to deal with the issues that arose in the sea, to struggle with the infringement and protect the sovereignty, the jurisdiction rights and national interests at sea.

Vietnam made efforts to promote negotiations with related sides on maritime issues. Vietnam and China held the 4th round of negotiations on the waters off the Gulf of Tonkin, four rounds of negotiation on the less sensitive fields at sea.

Vietnam and Indonesia conducted five rounds of negotiations on the delimitation of the exclusive economic zone.

Vietnam and Malaysia together asked the UN Committee on Continental Shelf Boundary to review their reports on the joint continental shelf boundary. 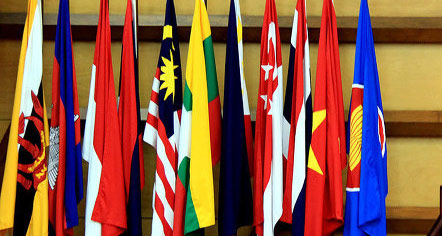 Vietnam coordinated with the Philippines to implement cooperation on maritime and ocean, exchanged with Thailand and Malaysia for cooperation in the overlapping continental shelf areas between the three countries...

Along with ASEAN countries, Vietnam actively collaborated with China to promote the consultations and the building of the Code of Conduct in the East Sea (COC).

At the international and regional forums, Vietnam’s constructive perspectives on the East Sea conflict received widespread support of international friends.

Most countries were interested in a desire to maintain peace and stability, ensuring security and safety of navigation in the East Sea. They also supported resolving disputes by peaceful means on the basis of international law, the UN Convention on the Law of the Sea; not use of force or threaten to use of force, calling the related parties to seriously implement the Declaration on the Conduct of Parties in the East Sea (DOC) and looking forwards to the COC.

Vietnam’s Law of the Sea took effect on January 1, 2013, creating a legal basis for the management, protection and effective use of waters, islands, strengthening cooperation with other countries in the context of Vietnam’s positive integration into the world. 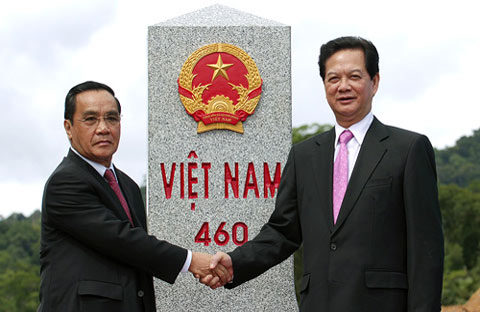 The Prime Ministers of Vietnam and Laos welcomed the completion of the project to embellish border markers on the field in July 2013. Photo: Chinhphu.vn

After more than five years, Vietnam and Laos completed the construction of a system of formal national border markers, with 792 landmarks.

The two sides are trying to complete the project to increase the number of landmarks by 2014.

Southwest border and 2/3 of the demarcation process

In 2013, Vietnam made many proactive measures to promote the demarcation process, actively cooperated with Cambodia in negotiations, field surveys to solve problems arising in the process of demarcation. However demarcation has not yet finished in some areas.

The two sides have identified 237 positions and 287 landmarks, built 231 landmarks and demarcated about 858km of borders.

Vietnam and Cambodia confirmed to closely cooperate in finding ways to promote the settlement of all remaining issues in the negotiations and in the field, determined to finish demarcation early.