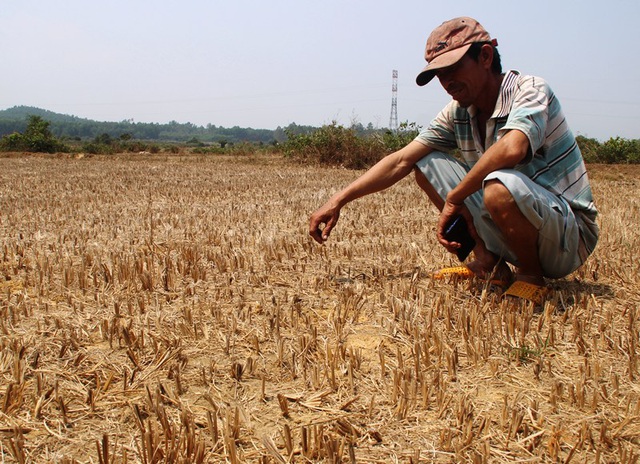 According to the locals in Thuan Hanh Village, the underground water sources have become depleted. They are also struggling with water shortages for daily activities.

50-year-old Vo Phong pointed out that 47 hectares of Cha Rang field of the village, where 50 households had worked on was now just dried wheat and weeds.

"Almost anything can be grown on this land and we rarely have pests. In good weather, we would have bountiful crops but we have suffered from water shortages for years and we can only work one crop a year. We've called for help but there's no response. A large amount of land has been abandoned," he said.

67-year-old Nguyen Van Ninh said droughts were becoming more and more severe, especially in the past two years. "I depend on the rice field but at this rate, I'm going to starve to death," he said.

Hundreds of households in Thuan Hanh and Thuan Hiep have to live with water shortages and their crops being destroyed. Last year, they had to carry water from far away to raise cattle until September. Many families paid millions of VND to dig wells but nothing is feasible.

Near the Cha Rang field is a canal directing water from Van Phong hydropower dam. The locals said several years ago, Le Kim Toan, head of the NA delegation from Binh Dinh Province visited the area and asked the Department of Agriculture and Rural Development to research and build a water system for the field.

"When we asked to direct the water from the canal to the field, some people from Binh Dinh Department of Agriculture and Rural Development came and took measurements but we never saw them again," he said.

Dang Van Hien, chairman of Binh Thuan Commune, said since the field was higher than the canal, a pump station must be built. "The construction is costly and the communal authorities don't have the funds," he said.

Phan Trong Ho, director of Department of Agriculture and Rural Development said, "The Ministry of Agriculture and Rural Development has approved of a VND400bn project to build a canal to direct water from An Khe-Kanak Lake to the field. The project will take two months. We will gradually invest in different pump stations and canals. The project depends on funding and water level in An Khe-Kanak Lake." Dtinews